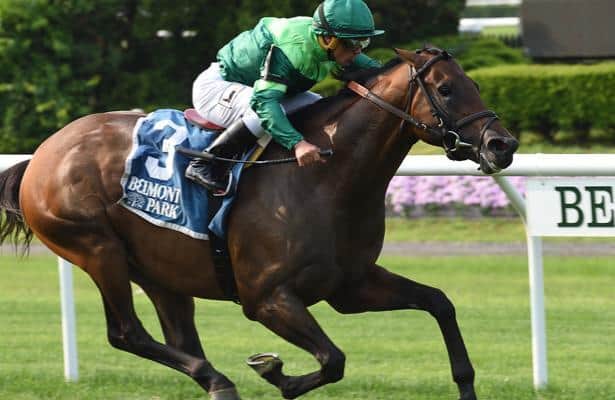 The 3-year-old colt, trained by Chad Brown and owned by Peter Brant, broke away from the pack down the stretch at Belmont Park to claim the Grade 3, $200,000 Pennine Ridge Stakes. The 1 1/8-mile race for 3-year-olds was run over Belmont’s inner turf.

With jockey Javier Castellano aboard, Demarchelier was sitting outside five other rivals at the top of the stretch.

Demarchelier thundered down the center of the track, passing leaders Value Proposition and Clint Maroon. Seismic Wave, stuck behind horses at the top of the stretch, made a move to the far outside and tried to run down Demarchelier but fell by a half-length.

"Today, he stretched out to a mile and an eighth, and he handled it so well," Castellano said. "With a slow pace, he finished really well. He's going in the right direction and has a good mind. He's going to be good in the future."

The win was the third in three times out for Demarchelier, who paid $12.40 to win. He also claimed victory Nov. 21 when he debuted in a maiden special weight race at Aqueduct and April 12 in an allowance event at Keeneland.

A next step for Demarchelier could be the $1 million Belmont Derby Invitational (G1). That 1 ¼-mile turf showcase for 3-year-olds takes place July 6 at Belmont.

"After he broke his maiden we had mapped out a plan to get to the Belmont Derby and fortunately it looks like the plan is coming together," Brown said. "He's a really top-quality colt. Obviously well-bred and well-ridden each time. It's exciting to have a horse headed to that big race."