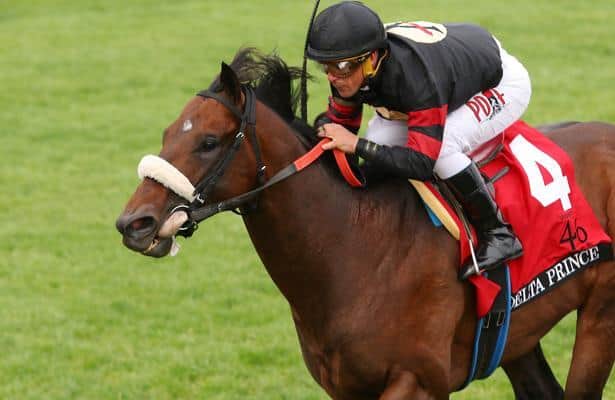 The Jimmy Jerkens trainee hit the wire with Javier Castellano in a final time of 1:35.97 over "good" turf.

“He’s grown up and matured into a really nice horse," said Jerkens. "When (Castellano) swung him out, he looked like he was starting to kick in."

The race marks the first career Grade 1 win for the veteran 6-year-old, who was a race removed from a third place finish in the Pegasus World Cup Turf (G1).

He rallied from last with a quarter mile to go -- and did so despite making an extra ship to California, where the Frank E. Kilroe Mile (G1) was canceled last month. Jerkens based the horse in Florida over the winter.

"I was really nervous down the backside," said Jerkens. "It looked like the leaders were really rolling. It looked like he was starting to make some headway. I know this stretch is pretty long. If (Javier) swung him and he kicked in right away, I thought he might have a chance. And he did.”

“I tried to take my time and let the race develop," Castellano added. "He picked it up a little bit at the top of the stretch. I like the way he finished. He finished really, really well.”

Defending champion Heart to Heart (6-1) reared up out of the gate, then regrouped to lead the field of seven through opening fractions of 24.25 and 47.79, being pushed by a gamely Great Wide Open (15-1).

“The first quarter was great for me but (Great Wide Open [IRE]) rushed up and I saw him running next to me," said jockey Julien Leparoux, who was aboard Heart to Heart. "My horse is the kind of horse where you can’t really take a hold of him too much, so I just tried to keep him nice and easy. But we went too fast on this kind of turf course. He was done at the end."

Great Wide Open and Heart to Heart finished sixth and seventh, respectively, while Chad Brown's Raging Bull made a late push on the outside in the final strides, but could never match the speed of the flying Delta Prince, who captured the field by a length and a half.

“I had a good trip. I asked him to go on and he did, but then the winner came with a strong run on the outside," said Joel Rosario, who was aboard the third place finishing Raging Bull. "I thought for a second I was going to win, but the winner definitely came on strong. My horse ran his race.”