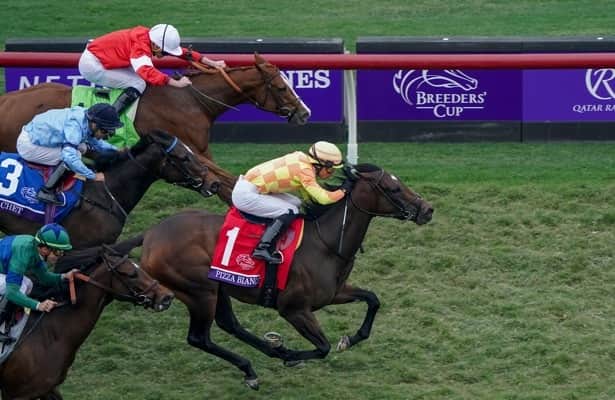 She was last. Dead last in the second turn. A run to the outside would have been futile.

Jockey José Ortiz had only once chance to make a difference with Pizza Bianca in Friday’s $1 million Breeders’ Cup Juvenile Fillies Turf at Del Mar. That was to go inside with a filly who had only ever gone wide before for her only victory.

That was what Ortiz said after he threaded a narrow path between rivals, finding the lead in the last 10 strides and guiding Pizza Bianca (9-1) past the wire for a thrilling, half-length triumph.

REPLAY: PIZZA BIANCA wins the $1 Million #BreedersCup Juvenile Fillies Turf on #FutureStarsFriday at @DelMarRacing! Cheers to all of the connections! @bflay pic.twitter.com/RyslQQjN8g

But wait. That “I had a lot of horse” response came to the question, “How much room did you have?”

Asked again just in case he did not hear the original question, Ortiz said it again.

Ortiz had to make up seven lengths in order to get back to the winner’s circle with a horse that ended trainer Christophe Clément’s 0-for-40 drought.

“He’s the best trainer in the world that hasn’t won a Breeders’ Cup,” winning breeder-owner-chef-personality Bobby Flay said. “I’m glad that that story is over. He is a very deserving trainer.”

But this was really about that ride, one that was captured on a GoPro camera that showed Pizza Bianca threading a needle of other fillies. At one point it appeared she looked to her left and nearly brushed the head of Cachet (20-1), the pacesetter who faded to fourth in the stretch. It was as if Pizza Bianca was saying, “Outta the way, I’m coming through.”

Malavath (17-1) made a late run along the rail to finish second, a neck ahead of Haughty (6-1), who made a four-wide run to finish third.

It was in the last 110 yards where Ortiz saw the gap he needed.

“When we passed the eighth pole, she got into a high gear,” he said. “I knew she was going to be tough. I saw the split from the sixteenth (pole). I knew I could see I was going to split right there.”

Ortiz admitted, though, his hands were tied in the stretch by the strict crop rules in California, where riders have been limited for the past year in how much urging they can give their horses.

“With the crop rule I couldn’t hit her,” he said. “I just tapped her on the shoulder when she made lead to get her attention. Babies sometimes need that when they make the lead for the first time running here. I made sure she was there, but she did everything on her own.”

Sired by the Australian stallion Fastnet Rock, Pizza Bianca previously won her debut at Saratoga before finishing second at Woodbine in the Natalma (G1) on Sept. 21. Both races were on good ground, so Friday marked Pizza Bianca’s first time racing on firm turf.

“Christophe had said to me, ‘I’m not sure she’s going to like the firm turf at Del Mar,’” Flay said. “In her only two races there was a little bit of cut in the ground. I said, ‘Well, she hasn’t on firm grass yet, so we’re going to try it.’ At the top of the stretch, she didn’t like the firm grass. Then all of a sudden, this guy (Ortiz) decides to get into the race. It was insane.”

With Clément absent from the post-race Q&A session because of his commitment to tend to Slipstream in the upcoming Juvenile Turf, Flay fielded the question about what is next for Pizza Bianca.

“I let Christophe make 90 percent of the decisions,” he said. “Listen, I’m a dreamer. I’m a dreamer, and I think these horses, when they’re really good, they can take you on great adventures all over the world.”

Any one specific dream?