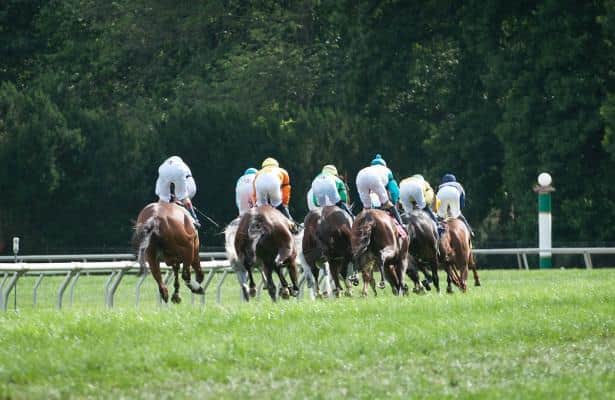 The 25th Owners’ Day at Delaware Park will showcase the best in Delaware racing this Saturday. The 12-race card includes seven stakes, four Delaware-bred or certified Thoroughbreds, two restricted to horses that have started at Delaware Park this year, and an Arabian Stake. The total purses for the day will be $677,500.

Trainer J. Larry Jones has two starters in the Owners’ Day stake races. He will have Dreamchaser Thorobreds All Out of Aces in the $75,000 DTHA Governors’ Day Handicap and Daniel McConnell’s Prince Lucky in the $75,000 First State Dash Stakes.

All Out of Aces has a career record of three wins, two seconds and a third from 10 starts with earnings of $58,180. He is a half-brother to multiple graded stakes winner Hard Aces. All Out of Aces has been sharp in his last three Delaware Park. In his most recent effort, the Kentucky-bred posted a 3-length score going a mile on August 10th. Previously, the 4-year-old son of Proud Citizen notched an 11-length triumph in a mile $40,000 claiming event on July 12th. On June 19th, he finished second beaten a head going a mile and seventy yards.

“It does seem like All Out of Aces really likes this track,” said trainer J. Larry Jones. “We have always been pretty pleased with him and we have had high expectations for him, so we are hoping he has turned a corner this summer. We are also hoping we are not getting too ambitious with him.”

Jones has also entered Prince Lucky in the First State Dash. In his only career outing, the 2-year-old Pennsylvania-bred son of Corinthian posted a 5 3/4-length score in a five and a half furlong maiden at Delaware Park on August 28th.

Trainer H. Graham Motion has two starters in the Owners’ Day stake races. He will have the Flaxman Holdings Tale of Life in the $75,000 DTHA Governors’ Day Handicap and West Point Thoroughbreds Boreale in the $75,000 George Rosenberger Memorial.

In his only outing this year, Tale of Life finished third beaten 4-lengths in a one-mile allowance at Delaware Park on August 14th. Last year, the 5-year-old son of Deep Impact posted a record of two wins, two seconds and two thirds from eight outings with earnings. The Japan-bred has a career record of three wins, three seconds, and three thirds from 16 starts with earnings of $163,654.

“We gelded him and it took me a little longer to get him back to the races, than I thought it would,” said trainer H. Graham Motion. “I thought he ran a respectable race in his only start this year and by running that day at Delaware, he made himself eligible for this spot, so it seemed like the logical thing to do.”

Motion has also entered Boreale in the Rosenberger Memorial. In her most recent, the 4-year-old daughter of Makfi finished third in the mile and seventy yard $150,000 One Dreamer Stakes at Kentucky Downs on September 6th. Previously, the Kentucky-bred finished third in the mile and seventy yard $75,000 West Virginia President Cup at Mountaineer on August 5th. In her only other outing this year, she won a mile and a sixteenth Delaware Park allowance by a nose on June 14th. As a 2-year-old and 3-year-old, she campaigned in France where she had a record of three wins, two seconds and a third from nine starts.

“She has had nothing but good solid efforts in her three races this year,” Motion said. “I think if she can run back to those races, she fits very nice in this spot.”

Trainer Keith Nations has entered Vince Campanella and Nation’s Racing Stable’s first-time starter Monkey Mind, a Kentucky-bred daughter of Archarcharch, in the five and a half furlong $75,000 Small Wonder Stakes, which is restricted to Delaware bred or certified 2-year-old fillies. Last year, Nations won the boy version, the First State Stakes, with Our Rombauer, so he is feeling confident with a first-timer.

“We are going to take a shot with a first-timer in the Small Wonder Stakes,” said trainer Keith Nations. “We won the boy version of this race last year with Our Rombauer in his first career start, so I am going to try and do it again with Monkey Mind. We purchased her at the Timonium as a yearling. We paid $50,000 for her. She has been working really well. She is going to be route filly and we did have her targeted for a maiden going a mile later this month. We started looking at the local 2-year-old filly division and thought, let’s give this a shot. We did it last year, so let’s give it a try again. We can always stretch her out after that. I have been putting some shorter quicker works into her which should sharpen her up. She worked :35 4/5 a couple of weeks ago and this week she worked :48 1/5. She might get one more blow out this week. I think she will be stalking and coming from behind, but hopefully she will be good enough to run them down, but it is worth taking the shot.”