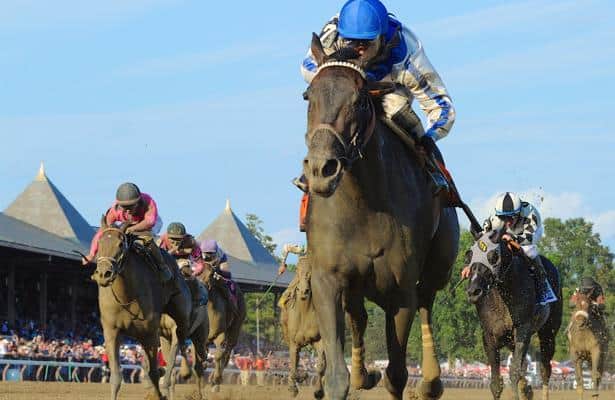 The flashy daughter of Medaglia d’Oro took the Grade 1 Alabama Stakes and the Grade 1 Beldame Stakes last season before ending with a fourth in the Grade 1 Breeders’ Cup Distaff. Now, eight months later, Elate is making her 2018 debut in Delaware Park’s premier race for fillies and mares run at 1 ¼ miles.

Downgraded from a Grade 1 this year, the Delaware Handicap has been won by champions including Songbird, Royal Delta and Blind Luck. Royal Delta, the 2012 and 2013 winner, was conditioned by Hall of Famer Bill Mott, who also trains Elate.

Ahead of Saturday’s race, here is a look at the field with morning line odds.

1. Teresa Z, 10-1 (Smart Strike – Anthony Margotta Jr. – 14:4-2-3 – $201,320): The St. Elias-owned filly last out won Delaware Park’s Obeah Stakes, the local prep for the Delaware Handicap. It was Teresa Z’s first victory since the Grade 3 Monmouth Oaks last summer. She’s improved with each race during her 4-year-old season, and the Delaware Handicap is a chance for her to step back up in graded competition. Improving local winner.

3. Mopotism, 9/2 (Uncle Mo – Doug O’Neill – 19:3-5-4 – $668,745): This well-traveled Reddam Racing filly finally earned her graded stakes win early this season in the Grade 2 La Canada Stakes. She’s finished in the money a total of 12 times, with many of those placings coming in graded company. Her last outing resulted in a third-place finish in the Grade 2 Fleur de Lis Handicap behind Delaware Handicap rival Farrell in second. Consistent shipper.

4. Proper Discretion, 20-1 (Discreetly Mine – Anthony Rini – 23:12-2-3 – $400,611): One of three for Loooch Racing, Proper Discretion has had a great run on the Ohio circuit, winning a handful of allowances and four Ohio-bred stakes there. She enters off two wins from Thistledown, including the J. William Petro Memorial Handicap, but has never hit the board outside her home state. A longshot at this level.

5. Unbridled Mo, 5/2 (Uncle Mo – Todd Pletcher – 11:7-0-1 – $1,035,880): Entering her 5-year-old season with a trio of Grade 3 wins, Unbridled Mo earned her biggest score yet in the Grade 1 Apple Blossom Handicap, strolling past Unique Bella to win by 2 ¼ lengths. She returned in the Ogden Phipps Stakes to try for another Grade 1 but only managed third 9 ¼ lengths behind Abel Tasman. With her biggest competition, Elate, coming off a long layoff, the Delaware Handicap sets her up to earn another big score. Looks like the perfect spot.

6. Elate, 2-1 (Medaglia d’Oro – Bill Mott – 10:4-3-1 – $870,325): The class of the field, Elate has already bested older fillies and mares with her gutsy Beldame win at the age of 3. Her Grade 1 credentials from that race, along with the Alabama, earn her favoritism. But the eight-month layoff could mean she needs a race to get fit. To Elate's benefit, Mott two weeks ago stretched her out in a seven-furlong drill at Saratoga, where she clocked in at 1:26.45. Elate also has experience over Delaware’s track from winning the Light Hearted Stakes last summer. Big favorite but ending long layoff.

7. Farrell, 9/2 (Malibu Moon – Wayne Catalano – 16:7-2-2 – $954,777): Edging close to $1 million in earnings, the front-running Farrell enters off a game second in the Fleur de Lis. That effort followed another big runner-up finish in the Grade 1 La Troienne Stakes, improving from last in the Apple Blossom. Though a multiple-graded stakes winner, she has not won past 1 1/16 miles. Will need to carry her speed farther.

8. Nikki My Darling, 20-1 (Creative Cause – Jeffrey Radosevich – 14:7-1-0 – $253,933): As with Proper Discretion, this Loooch runner has found success in Ohio, winning three state-bred stakes. She failed to make any noise in two out-of-state Grade 1 races, and the Delaware Handicap places her against fillies with more experience and better results in graded stakes company. Lacks the resume.

9. Fuhriously Kissed, 15-1 (Langfuhr – Anthony Quartarolo – 18:3-3-4 – $262,247): Now multiple graded stakes-placed after being claimed by Loooch in March, Fuhriously Kissed ran third in both the Apple Blossom and the Grade 3 Allaire DuPont Distaff Stakes. The 5-year-old mare last ran seventh in the Grade 2 Fleur de Lis Handicap. Should the pace be fast enough Saturday, Fuhriously Kissed stands a shot at finishing in the money again. Watch for this late runner.

Summary: Should Elate return in top form, she will be game and hard to beat. If not, Unbridled Mo has a good chance to take down another top filly, and she already has three races under her belt this year. Farrell is also knocking on the door for another win after two big seconds. Should Farrell stretch out her speed, she’ll be the filly to catch if the two main contenders come up empty.