Delacour wants Bombshell to make the grade in Marshua's River 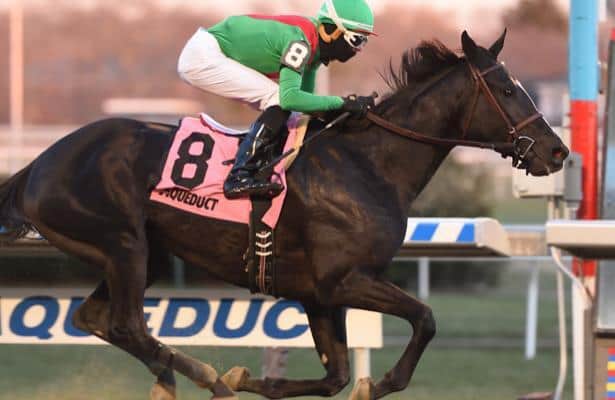 Bombshell, a daughter and granddaughter of Grade 1 winners Bellamy Road and Hall of Famer A.P. Indy, respectively, won three of her final four races at 5 to match the total through her first 14 starts primarily in New York.

She captured a one-mile, 70-yard optional claiming allowance July 11 at Delaware Park, then was beaten a neck when third in the West Virginia Senate President’s Cup Aug. 4 at Charles Town. Bombshell returned to Delaware to win a similar spot Sept. 3, capping her season with a 4 ½-length romp in the one-mile Forever Together Stakes Nov. 23 at Aqueduct.

“She came around at the right time, and I was able to find the right spots for her,” trainer Arnaud Delacour said. “New York is not an easy circuit, and we got lucky enough to have the right kind of races at the right time and she moved forward from there. I’ve been very happy with her. I think she’s training very well.”

While her races at Delaware and Charles Town both came on the grass, Bombshell’s lone career stakes win in the Forever Together came after it was rained off the turf onto a fast main track. Two-time defending Championship Meet-leading rider Luis Saez will be aboard from Post 3 of eight at 119 pounds.

“She’s doing very well. She had a very nice summer for us. I like the filly, she’s very honest,” Delacour said. “The good thing with her is that she’s efficient on dirt and turf. She’s versatile that way, and she always tries. So, we’ll give her a try in that spot and see what happens.”

Bombshell has finished in the top three in 13 of her 18 career starts with six wins and nearly $290,000 in purse earnings. She has one previous start against graded company, finishing sixth in the 2017 Beldame (G1) on dirt at Belmont Park.

“They are not easy to win, those races, obviously, but I think she deserves to be a graded-stakes winner so we’re going to try,” Delacour said. “She’s got tactical speed and I think that’s the kind of thing you need at Gulfstream on the turf course when it’s firm. It’s always nice to have a little bit of tactical speed. She doesn’t have to make the lead; she can sit off the pace. She’s pretty easy, really.”

The 4-year-old French-bred filly let the pace into the stretch of the 1 ¼-mile Belmont Oaks Invitational (G1) in her subsequent start, but faltered late and wound up last in the field of 10. She emerged from that race with an issue and will be making her first start in six months in the Marshua’s River.

“She won the prep for the Belmont Oaks last year. We removed a chip from her ankle after the Oaks,” Lynch said. “She’s trained wonderful. She’s a lovely filly. We’re excited about kicking off her 2019 campaign.”

Trainer Mike Trombetta entered Country Life Farm’s stakes winner Monte Crista, who has not raced since finishing last of 10 over a soft course in the one-mile Pebbles Stakes Oct. 13 at Belmont Park. It was a rare off day for the 4-year-old filly that has four wins and a third from seven career starts, all last year.

“She did wonderful last year,” Trombetta said. “Everything she did made all the sense in the world. The only problem was, her last race the turf was particularly soft and [jockey Julian Pimentel] just remarked that she wanted nothing to do with it. She was just about eased in the race, but I think he was just looking out for her. He asked her to go and she didn’t want to go and he protected her and brought her back home. The turf was really, really soft at that point.”

Monte Crista, winner of the one-mile Riskaverse Stakes Aug. 23 at Saratoga, has been training forwardly for what would be her graded-stakes debut with back-to-back bullets over two Gulfstream surfaces. She went five furlongs in 59.43 seconds Dec. 30 on the main track, and followed with a half-mile breeze in 45.05 Jan. 6 on the grass.

“She actually worked good on the dirt last week, better than I anticipated, and I worked her on the grass the other day and she worked really, really good,” Trombetta said. “She’s pretty handy, man. That filly will do whatever you tell her to. If you want to sit and relax, she’ll relax. If you ask her to go, she goes. She’s pretty nice that way.”

Hall of Famer John Velazquez has the call from outside Post 8 at co-highweight of 121 pounds.