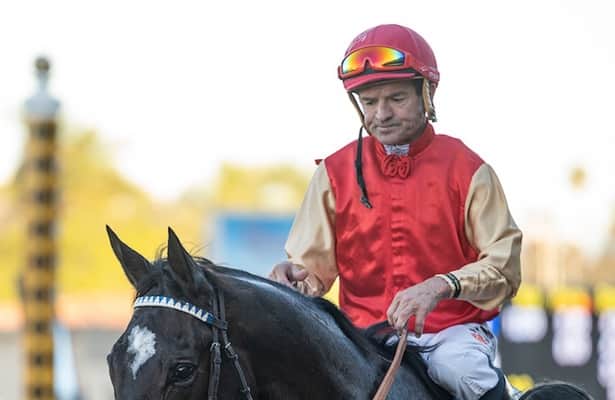 Hall of Fame jockey Kent Desormeaux has been suspended by Del Mar stewards for 60 days, effective Monday through Oct. 6.

The charges for which he was suspended include disorderly conduct, related to aggressive behavior in the Del Mar RV park area on Nov. 23, and failure to abide by an agreement with the Winners Foundation, a California nonprofit that helps racetrack workers with substance abuse and other problems. The ruling states that Desormeaux must sign a testing agreement with The Winners Foundation when he is licensed. It threatens suspension if he doesn't abide by the foundation's recommendations.

Del Mar stewards filed that decision in a ruling dated Sunday. This supersedes a ruling issued by Santa Anita stewards on March 4, which suspended Desormeaux indefinitely for failing to appear at a stewards' hearing. Jay Privman of Daily Racing Form reported that the hearing concerned the same charges as in Del Mar's ruling, as well as the failure to appear.

Desormeaux has not ridden since Jan. 23, when he guided 18-1 shot Stella Noir to an allowance win on the Santa Anita downhill turf course for his brother, trainer Keith Desormeaux. On Friday, Jan. 28, he was arrested in Louisiana for domestic abuse. He gave up several mounts after that arrest, including the call on Stilleto Boy in the Pegasus World Cup (G1) at Gulfstream on Jan. 29.