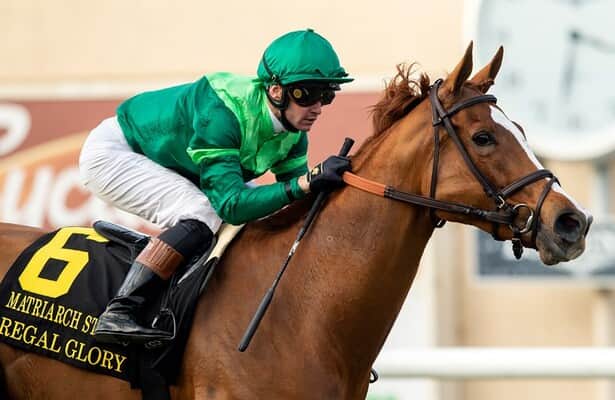 The 6-year-old daughter of Animal Kingdom raced to a 5 1/4-length victory in the turf mile, and she ran it in 1:33.60, the second-fastest time for the headliner since it was shifted from Hollywood Park to Del Mar nine years ago.

Regal Glory was handled by Flavien Prat, who went on to win six races for the day to ensure he would be the leading rider at the meet. He finished with 24 firsts in 86 mounts, a 36 percent win rate. It was his sixth local riding title and second one in the fall. Prat had won six races in a day at Santa Anita on May 18, 2020.

Chad Brown, who trains Regal Glory, captured his fifth edition of the stakes, including last year’s running.  Regal Glory will be retired now to a breeding career.

Finishing second in the Matriarch was England’s Rose, the Mercedes Stables, West Point Thoroughbreds and partners’ mare who had just a nose on Bobby Flay’s third-place Pizza Bianca.

The classy Regal Glory blows on by to defend her title in the Grade I Matriarch Stakes. This makes win 5?? for Flavien. ?? pic.twitter.com/tsTSmbalYI

Pegram, Watson and Weitman’s Speed Boat Beach raced to a half-length victory in the $101,500 Cecil B. DeMille (G3) at a mile on the turf.

Flavien Prat just keeps winning - he's won on all four of his mounts so far today!

Bob Baffert trains Speed Boat Beach, and the stakes tally was his 156th at the shore oval, a mark that put him more than 70 winners ahead of his next pursuer.