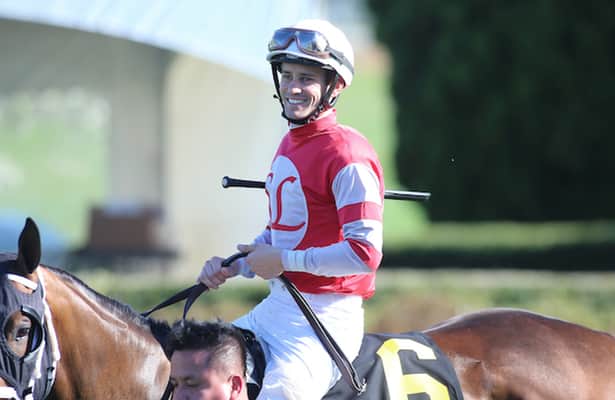 With a closing-day burst of six winners on the nine-race card, jockey Flavien Prat won his sixth Del Mar riding title. During the meet he booted home 24 firsts in 86 mounts, an exceptional 36 percent win rate. His victories included six in graded stakes, headlined by a win with Regal Glory in the Matriarch (G1) on closing day.

Trainer Phil D’Amato captured 19 races during the 13-day session and took home his fourth Del Mar title. Those included a pair of graded-stakes triumphs with Hong Kong Harry in the Seabiscuit (G2) and Prince Abama in the Hollywood Turf Cup (G2). He also won the Stormy Liberal Stakes on closing day with Turn On the Jets.

With four wins each, the partnership of Red Baron's Barn and Rancho Temescal finished in a dead heat with Nicholas B. Alexander for the ownership crown.

The partnership of Red Baron's Barn and Rancho Temescal is a family affair: Red Baron's Barn principal Jed Cohen, who died a week before the Del Mar meet ended, was the father of Rancho Temescal owner Tim Cohen. Their four 2022 fall-meet wins included the Red Carpet Stakes (G3), which they won with Bellstreet Bridie in her first stateside start. The partnership had purchased her Oct. 24 at the Tattersalls Autumn Horses in Training sale.

All of Alexander's victories came in maiden or allowance company. He tied the owners' race in Sunday's fourth race when his homebred Tecumseh Caroline romped by 4 1/2 lengths in a California-bred maiden special weight dirt sprint. Tecumseh Caroline is a daughter of prominent California sire Grazen, who Alexander also owned and bred.

"We've been building momentum over the last few years, working hard to create a wonderful experience for racing fans and the horsemen and women who support our program," said Del Mar Thoroughbred Club’s CEO, Joe Harper. “While the business results are positive, we are exceptionally proud that we've been able to maintain our status as one of the safest racetracks in the country.”

Buoyed by the ship-and-win program, average fall meet field size increased to 7.91 runners per race as compared to 7.76 in 2021. A total of 515 starters participated at Del Mar in the summer and fall of 2022. Del Mar officials expect the majority of these runners will continue to compete in future Southern California race meets.

The track's autumn turf festival again drew runners from across the country to participate in the nine stakes that were offered over the final two weekends of the meet.

“Once again, the Del Mar Thoroughbred Club showcased world-class racing with an exemplary safety record,” said Thoroughbred Owners of California chairman, Gary Fenton. “They also contributed to our ecosystem by investing in industry beneficiary funds like ‘Ship & Win.’ It is great to partner with a track operator that consistently goes above and beyond what is required. Del Mar continues to show horsemen they want to be a big part of our future.”

Racing will return to Del Mar in July for the track’s 84th summer season.