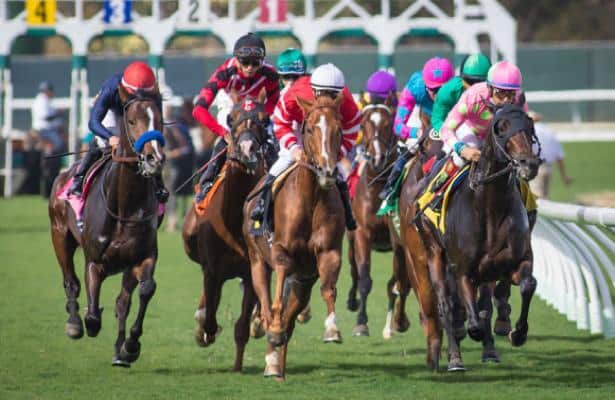 Del Mar has reached the halfway point on the calendar for its eight-week summer meet, which this year runs past Labor Day with a closing date of Sept. 11. Racing resumes Thursday with an eight-race program that averages 9.1 starters per race before scratches.

Through the first 15 days of the 31-day stand, Juan Hernandez has scampered to the top of the jockey standings with 27 wins, 12 more than runner-up Umberto Rispoli. The 30-year-old native of Veracruz, who also was the leading rider at the Santa Anita winter-spring meet, has left no doubt as to being Southern California’s new top jockey.

In Sunday’s Best Pal for 2-year-olds, Hernandez piloted Baffert-trained Havnameltdown to a front-running 2 1/2-length victory. The Florida-bred colt by Uncaptured was exiting a debut win three weeks earlier at Del Mar while ridden by Florent Geroux.

A day before the Best Pal, Hernandez won with the ultra-impressive Cave Rock for Baffert. By Arrogate, Cave Rock rolled to a six-length victory while completing 6 1/2 furlongs in a swift 1:15.81 on Saturday. The effort earned a 101 Beyer Speed Figure, which Daily Racing Form reported is tied for the highest by a 2-year-old this season.

Winning aboard both Havnameltdown and Cave Rock could lead to an interesting decision for Hernandez later in the meet should both run in the Del Mar Futurity (G1) on closing day.

Below is a closer look at three more Del Mar jockeys with hot hands the previous two weeks and three who struggled.

After a 1-for-27 start to the meet, the 30-year-old native of France appears to have found his rhythm. He's had particular success when riding for trainer Mark Glatt, who himself has heated up after a rough start to the Del Mar meet.

Among Curatolo’s winners for Glatt was City Rage in an allowance/optional claimer on Saturday and Flame McGoon in a maiden special weight last Thursday.

Curatolo, who has ridden in multiple jurisdictions around the world, arrived in Southern California last November for Del Mar’s fall meet. He finished the Santa Anita winter-spring meet tied for seventh in the jockey standings with 30 wins from 232 mounts, a 13 percent strike rate.

A former champion jockey in Chile, this is Berrios’s first time riding at Del Mar after plying his trade mostly at Gulfstream Park in recent years. He has quickly proven a welcome addition to the local jockey colony.

Berrios has booted home a pair of stakes winners at the meet – Irideo in the Wickerr and Blue Stripe in the Clement L Hirsch (G1) – and currently ranks eighth in the Del Mar jockey standings with eight wins from 33 mounts (24 percent).

Berrios, who first came to ride in the U.S. in 2011 but then returned to Chile, has been back in the U.S. since 2018. His best domestic season came in 2020, when he compiled more than $2.5 million in purse earnings. In Chile, Berrios won more than 2,500 wins, including eight Triple Crown races.

Berrios has four rides on Thursday’s card at Del Mar and two more on Friday.

Although he’s cooled down a touch from a red-hot start, it was still another strong two weeks for “Jersey Joe” at Del Mar. A big part of his success has resulted from a blossoming partnership with trainer George Papaprodromou, who himself ranks fourth in the trainer standings. Among the winners for that duo was Cabo Spirit in last week’s La Jolla Handicap (G3).

For the meet, Bravo ranks third in the jockey standings with 12 wins from 51 mounts (24 percent). He has no rides scheduled for Thursday and two for Friday.

It was a rough two weeks for the 30-year-old native of California, who has had a bit of “second-itis” at the meet with 13 runner-up finishes. Frey arrived on the Southern California circuit for last year’s Del Mar summer meet and finished eighth in the jockey standings with 14 wins.

This year Frey is 4-for-86 at the stand, which is a 5 percent win rate. He has not ridden a winner since July 29. Frey will get plenty of chances to end that streak this week. Saturday’s and Sunday’s cards at Del Mar have yet to be drawn, but he has six mounts on Thursday and five more on Friday.

After a 2-for-67 start to the meet, Baze was a no-show for last Thursday’s Del Mar card. A day later when meeting with stewards, he said the unexcused absence was related to “personal matters.”  Baze, who was fined $1,000 for the transgression, then took off all his scheduled mounts for the remainder of the week with the approval of the stewards.

Baze’s last winner came on July 29. He is scheduled to return to the saddle this week with three mounts on Thursday and six on Friday, including aboard Freedom Lass for trainer Bill Spawr in the CTT and TOC Stakes.

The struggles have continued for the 27-year-old native of Louisville. He is only 2-for-52 overall at the meet.

Last year, Van Dyke moved his tack in the spring from California to his native Kentucky, where he failed to gain much traction. He returned for last year's Del Mar summer meet and finished in a tie for 12th with a record of 8-for-102. At the most recent Santa Anita meet, he won at a 10 percent clip (24-for-232).

Van Dyke will have limited opportunities Thursday and Friday to get things turned around. The 2014 champion apprentice jockey has only one mount scheduled for each day, both with maidens.