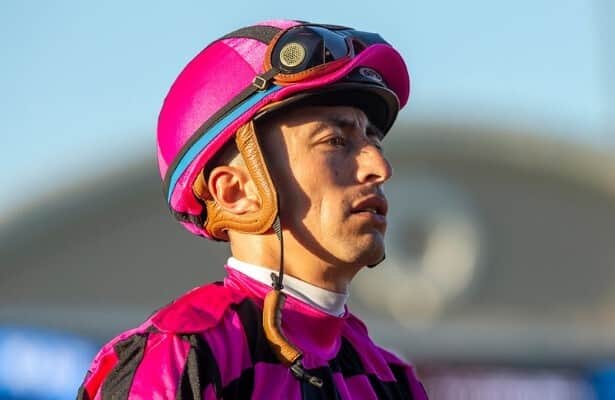 Juan Hernandez, the runaway leader in the Del Mar jockey standings, and two-time Kentucky Derby-winning rider Mario Gutierrez were each slapped with three-day suspensions for causing interference at the start of Sunday's 10th race.

The inquiry sign lit up shortly after the finish and a jockey's objection was also filed, prompting an announcement from Trevor Denman that stewards were reviewing the start of the race.

See who is riding well at Del Mar, and elsewhere, with the Hot Jockey Report

Stewards took no action against Awake at Midnyte, but disqualified Fun to Dream from second to ninth. Hernandez was suspended "for failure to maintain a straight course out of the starting gate and causing interference."

Gutierrez was suspended three days "for altering course without sufficient clearance shortly after the start and causing interference."

Both suspensions will be served from Sept. 16 to Sept. 18, which is opening weekend of the Los Alamitos meet. The suspensions do not prohibit either jockey's participation in "designated races," which typically refers to stakes events.

Hernandez has won 45 races while connecting at a 25 percent clip at the Del Mar meet. The next closest pursuer is Umberto Rispoli with 26 wins. Gutierrez has ridden nine winners from 70 mounts (13 percent) to rank ninth in the jockey's standings.