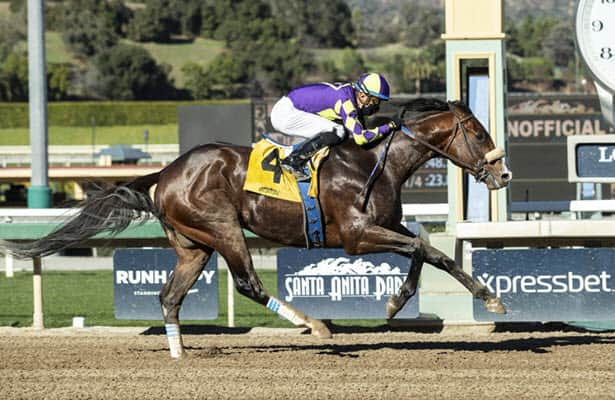 Saturday's San Diego Handicap (G2) at Del Mar drew a strong cast of nine that includes four Grade 1 winners. The most notable name not in the entries was Express Train, last year's San Diego winner who this winter reeled off three straight graded-stakes wins, including the Santa Anita Handicap (G1).

Express Train has not started since the April 30 Californian Stakes (G2) at Santa Anita when running second to Stilleto Boy, who is in the San Diego. Prior to that, he scored in the San Antonio (G2) and San Pasqual (G2) before taking the Big 'Cap.

Trainer John Shirreffs, who is well-known for his patient handling, said Express Train was a tired horse after the San Diego. The Hollywood Gold Cup (G1) on May 30 was ruled out for Express Train with an eye toward Del Mar.

Shirreffs hoped to make the San Diego, but instead elected to wait for the $1 million Pacific Classic (G1) on Sept. 3.

"I am planning on running him in the Pacific Classic. He has made steady progress since his last race and as you can see his works have improved. However he needs more fitness," Shirreffs told Horse Racing Nation.

Express Train has worked six times since June 28. On Saturday, he had his work work at Del Mar when drilling five furlongs from the gate in 1:00. It was the 12th fastest of 86 moves at the distance.