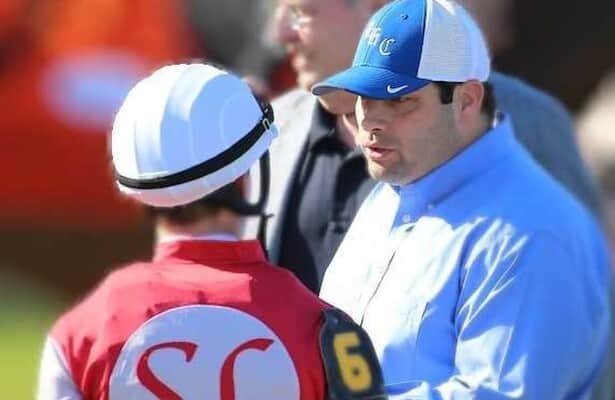 With a Kentucky Derby, a Belmont Stakes and eight Breeders’ Cup victories since 2018, Brad Cox has written himself onto the short list of elite trainers in North America.

While earning the last two Eclipse Awards, Cox has done most of his winning east of the Mississippi. That part of his résumé has overshadowed his occasional visits to Del Mar, where Cox shipped Mandaloun for Saturday’s Grade 2, $300,000 San Diego Handicap.

“We’ve had some luck sending horses to California,” Cox said in an interview for Horse Racing Nation’s Ron Flatter Racing Pod. “He did arrive out there (Wednesday) and trained (Thursday) morning. He looked phenomenal, and I’m really excited about getting an opportunity out there.”

Del Mar is where Cox authored one of his signature successes, saddling Knicks Go for a championship-clinching victory last fall in the Breeders’ Cup Classic. It also is where he will send Shedaresthedevil next week to defend her 2021 victory in the Clement L. Hirsch Stakes (G1).

Since he first showed up with two horses on the Breeders’ Cup undercard in 2017, Cox has had 20 starters at Del Mar. Eleven of them finished in the money. Four of them were winners, including Knicks Go, Shedaresthedevil, Beau Recall in the 2019 Yellow Ribbon Handicap (G2) and Arklow in the 2020 Hollywood Turf Cup (G2).

For Mandaloun, the promoted winner of the 2021 Kentucky Derby, the San Diego will put him in a rematch with Country Grammer, who beat him and all but one other horse last winter in the $20 million Saudi Cup (G1).

After a four-month break, Cox saw his 4-year-old Into Mischief colt finish a distant fourth July 2 in the Stephen Foster (G2) at Churchill Downs.

“We need to find out where we are with him,” said Cox, who was in Kentucky on Thursday before heading back to Saratoga. “I thought his last race wasn’t a bad race. It just wasn’t what we were expecting or hoping for.”

“He’s one of the top horses in the country,” Cox said, “and we just weren’t quite ready to face him.”

Mandaloun and Olympiad could have met again next Saturday in the Whitney (G1) at Saratoga, but Cox opted instead for the left-hand turn to the West Coast.

“I just thought it made the most sense right now,” he said. “I thought the San Diego came up a very, very good race. I think it’s a Grade 1 field.”

It certainly looked that way when the nine starters who drew into the field were led by 5-2 morning-line favorite Country Grammer. The 5-year-old Tonalist horse trained by Bob Baffert was assigned the top weight of 125 pounds for his first assignment since his victory over Hot Rod Charlie in the $12 million Dubai World Cup (G1) on March 26.

Referring to the 1 1/16-mile distance of the San Diego, Baffert told the Del Mar media office, “It’s going to be tight. He’s more of a mile-and-a-quarter type of horse, but it’s nice to have a race into him. We sent him to the farm for a couple of months – WinStar Farm – and they sent him back looking great.”

Mandaloun, a Juddmonte homebred who will carry 121 pounds Saturday, cuts back to the distance at which he earned his last two victories – the 2021 Pegasus Stakes at Monmouth Park and the Jan. 22 Louisiana Stakes (G3) at Fair Grounds. With morning-line odds of 4-1, he will be ridden as ever by Florent Géroux, who is based this summer in Southern California.

“He did decide to race at the Del Mar meet,” Cox said. “We talked about going up to Ellis or maybe flying up to Saratoga, and that worked out opening weekend with the Sanford (G3, won by Cox’s 2-year-old colt Mo Strike). Once California started rolling, he wanted to move his tack out there. Even before he made the decision, we kind of eyeballed the San Diego for Mandaloun.”

Cox said Géroux’s move to Del Mar also fit his plan to send Shedaresthedevil back to the Hirsch Stakes next Saturday. For the 5-year-old Daredevil mare who has three Grade 1 wins, it will mark her fifth race at Del Mar. As a 2-year-old she finished third and fourth there in stakes starts for her original trainer Simon Callaghan. After Staton Flurry bought her and transferred her to Cox, she won the Hirsch before returning to finish sixth last fall in the Breeders’ Cup Distaff.

Next week will be Shedaresthedevil’s first Del Mar start for the partnership that brought Mandy Pope and Qatar Racing on board with Flurry to the tune of $5 million at a Fasig-Tipton sale last fall.

Asked about sending Shedaresthedevil back to the Hirsch five weeks after a victory in the Fleur de Lis (G2) at Churchill Downs, Cox said, “It’s another Grade 1. We liked the timing between the races. I talked it over with (the owners), and they were good with giving her another opportunity out there and thought it was the best approach toward getting her back to the Breeders’ Cup Distaff. With this race we may have an opportunity to run her a couple more times before the Breeders’ Cup or maybe just once. We’ll see how things go next week.”

Mandaloun and Shedaresthedevil may be in California the next two weekends, but for the most part this summer, Cox is staying put at Saratoga. His visit to Monmouth Park last weekend to watch Cyberknife win the Haskell (G1) was an exception – and a harrowing one.

Cox was one of six people in a group organized by rival trainer Chad Brown to pay for a private flight from upstate New York to the Jersey Shore. A turbulent, private flight.

“It was a little rough,” Cox said with a relieved laugh. “The last 15 minutes of it flying into Jersey, it was a little rocky. But the flight home, it felt better winning the Haskell, and it was a lot smoother back up to Saratoga on Saturday night, to say the least. It was a little dicey, but we did make it safe and sound, and it worked out well.”