Deep cast could challenge War of Will in Sunshine Forever Stakes 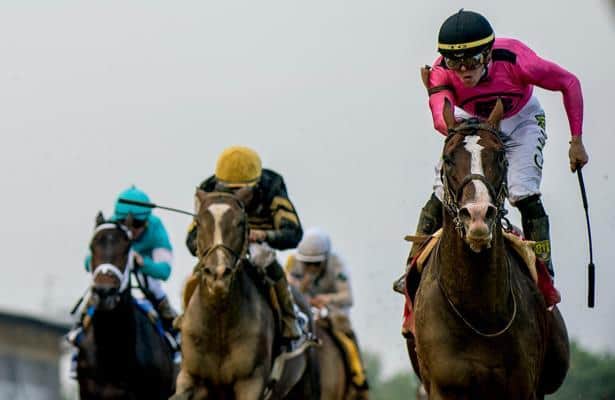 Saturday’s Sunshine Forever Stakes at Gulfstream Park is shaping up to be as deep a $75,000 event as you’ll find. With top trainers apparently looking for one more start in south Florida before heading north, a slew of graded winners are under consideration including last year’s Preakness Stakes winner, War of Will.

On Sunday, the Gulfstream Park racing office listed 12 horses as possible for the 1 1/16-mile turf feature. Trainer Mark Casse told Horse Racing Nation over the weekend he is still determining if War of Will makes his seasonal bow in the Sunshine Forever or waits for the Shoemaker Mile (G1) at Santa Anita Park should it resume racing this month.

In addition to War of Will, who has not started since finishing ninth in last year’s Breeders’ Cup Classic, Casse said March to the Arch and champion Got Stormy are also under consideration for the Sunshine Forever.

“I could run [War of Will]. I may run March to the Arch. There’s a shot, I might supplement -- although I didn’t nominate her -- Got Stormy,” Casse told the Gulfstream Park publicity office. “I don’t know which one I’m going to run. I wouldn’t run all three.

“Everything is kind of up in the air right now,” Casse continued. “All three of them are ready. Like I said, there’s no way I’m going to run all three. I don’t know if I’d run two against each other. Right now, War of Will is No. 1 on the list to go.”

War of Will made four starts as a 2-year-old on turf without a win, which includes a Grade 1 placing in Woodbine's Summer Stakes (G1) and a try at the Breeders’ Cup Juvenile Turf. One start later, he broke his maiden on the dirt and has remained there since.

The Casse contingent is among numerous graded stakes winners possible for the Sunshine Forever. Others include El Tormenta, A Thread of Blue, Caribou Club, Hawkish and Social Paranoia.

Sam-Son Farm’s El Tormenta won last year’s Woobine Mille (G1), defeating Got Stormy, before finishing sixth in the Breeders’ Cup Mile. He was off the board when making  his seasonal bow off a nearly five-month layoff in the March 28 Appleton (G3) at Gulfstream Park.

Hawkish won the Penn Mile (G2) in 2018 for trainer Jimmy Toner and, while limited to just three starts a season ago, added a win in the Cliff Hanger at Monmouth Park. The lightly-raced 5-year-old has won four of eight starts. This would be his first start since finishing off the board in the Oct. 5 Belmont Turf Sprint Invitational.

Social Paranoia closed out last season with a win in the Sept. 8 Dueling Grounds Derby at Kentucky Downs for trainer Todd Pletcher and  exits a sharp win in the local Appleton (G3) in his seasonal bow on March 28, earning a lofty speed rating.

A season ago, A Thread of Blue won the Palm Beach (G3) at Gulfstream and added a win in the rich Saratoga Derby. However, in two starts this year, the Hard Spun colt has finished off the board in both the Tropical Turf (G3) and Mac Diarmida (G2) most recently on Feb. 29. This will be his first start for trainer John Servis after previously being with Kiaran McLaughlin.

Caribou Club was a multiple Grade 3 winner last season for trainer Tom Proctor, but the 6-year-old City Zip gelding has finished out of the money in both the Tampa Bay Stakes (G3) and Canadian Turf (G3) this season.

Entries will be taken Wednesday for the Sunshine Forever, the country's only stakes to be run this weekend.