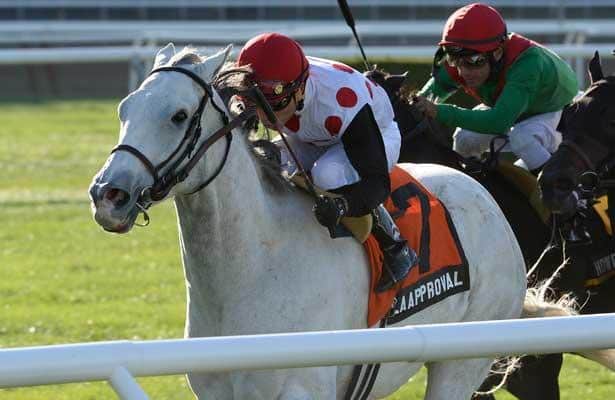 Trained by Christophe Clement and presently based at Payson Park in South Florida, Za Approval has been idle since running second, beaten three quarters of a length, by eventual repeat Horse of the Year Wise Dan in the Grade I Breeders’ Cup Mile at Santa Anita Nov. 2.  A 6-year-old gelding by Ghostzapper, Za Approval has four wins and five seconds at one mile on turf and is 17-7-6-0 overall with earnings of $1,035,345.

Owned and bred in Kentucky by Live Oak Plantation, Za Approval, a winner two starts back of the Grade III, 1 1/8 miles turf Knickerbocker Stakes Oct. 12 at Belmont Park, will be ridden for the third consecutive time by Joel Rosario on Saturday.

Leading rider Rafael Bejarano, who rode Winning Prize to victory in the Arcadia Stakes Feb. 1, will stick with trainer Gary Mandella’s Silentio, who has been idle since a game nose victory in the 1 1/16 miles Citation on Nov. 29 at Hollywood Park.

Third, beaten 1 ½ lengths by Wise Dan in the Breeders’ Cup Mile, Silentio had to wait for room at the rail a quarter mile from home and could well have been closer with clear sailing.  Second, beaten a nose by Ron McAnally’s Suggestive Boy in last year’s Kilroe, Silentio has two wins from six starts over the Santa Anita lawn and is 10-4-1-4 overall with earnings of $626,960.

A 5-year-old horse by the Sunday Silence stallion Silent Name, Silentio was bred in Kentucky by his owners, Wertheimer and Frere.

A three-time Group I winner in his native Argentina, Winning Prize notched his first stateside stakes win in the Arcadia, stalking the pace and winning by an emphatic 1 ½ lengths at odds of 5-2.  Third, beaten three quarters of length two starts back in the Citation, 5-year-old Winning Prize will be making his fifth start for trainer Neil Drysdale.

Owned by David Heerensperger and Jose Nelson, Winning Prize has four wins and a second from five tries at one mile on turf and is 12-7-1-1 overall with earnings of $400,840.

Never a factor as the actual 5-2 Arcadia favorite, McAnally’s Suggestive Boy had been idle 11 months and could well improve in defense of his Kilroe title with a recent race under his belt.  A 6-year-old Argentine-bred horse, Suggestive Boy has five wins and a second from nine starts at a mile on grass.  Owned by Pozo de Luna, Inc., he is 14-7-2-0 overall with earnings of $681,370.  Suggestive Boy will again be handled by Joe Talamo, who has guided him to three added money victories.

In addition to last year’s running, Hall of Fame conditioner McAnally has won the Kilroe a total of three times—beginning with Kobuk King in 1973.

In his first try in graded stakes competition, Tom’s Tribute was a fast finishing second in the Arcadia with Gary Stevens aboard.  Trained by Jim Cassidy, “Tom” earned a career best 102 Beyer Speed figure and will hope to be flying late under Stevens in the Kilroe.  An impressive one mile turf allowance winner in similar fashion four starts back on Sept. 29, the 4-year-old colt by Lion Heart has a win and two seconds from four tries at a mile on turf.

Idle since eased in the Grade I Sword Dancer Stakes Aug. 17 at Saratoga, Calumet Farm’s Optimizer was second, beaten 1 ½ lengths two starts back over a yielding turf in the Grade I, 1 ¼ miles  Manhattan Handicap June 8 at Belmont Park.  Although he has solid credentials at longer distances, he has never tried one mile on turf.

A 5-year-old horse by English Channel, Optimizer is trained by D. Wayne Lukas and he’ll be ridden by Luis Saez, who will also ride Will Take Charge for Lukas in the Grade I Santa Anita Handicap.

Front running Regally Ready, who opened up five lengths on the field after a half mile in the Arcadia, tired late to finish third, beaten 1 ¾ lengths and is expected to again show good speed with Mike Smith back aboard.  An impressive gate to wire mile allowance winner Jan. 2, he has two wins from four starts at a mile on grass and is 30-11-2-6 overall with earnings of $1,348,808.

A 7-year-old gelding by More Than Ready, Regally Ready is trained by Steve Asmussen and is owned by Vinery Stables, LLC.

In his first attempt in stakes competition, trainer Marcus Vitali’s Lochte blew out the Gulfstream Park tote board with a 39-1 shocker in the Grade I, 1 1/8 miles Gulfstream Park Turf Handicap Feb. 9.  Third in his only one mile turf try, Lochte worked a bullet three furlongs in 35.20 at Calder Race Course Feb. 24 and should be forwardly placed in the Kilroe.

Although he’s never been beyond 6 ½ furlongs, California-bred Lakerville has demonstrated a wicked closing kick sprinting and will hope to transfer that style to one mile.  A lightly raced 6-year-old horse by Unusual Heat, he’s trained by his co-breeder Barry Abrams and is owned by Madeline Auerbach and Abrams.  Lakerville was most recently second, beaten 1 ½ lengths as the 4-5 favorite in the state-bred Sensational Star Stakes at 6 ½ furlongs down the hillside turf course Feb. 22.

Trainer John Sadler’s Horizontalyspeakin is an up-and-comer who exits a sharp gate to wire one mile turf allowance win on Jan. 26.  In his only stakes try to date, he showed the way and was well beaten in the one mile turf, Grade II Sir Beaufort Stakes Dec. 26.  Owned by Hronis Racing, LLC, the 4-year-old Maryland-bred gelding has two wins and a third from five tries at a mile on grass.