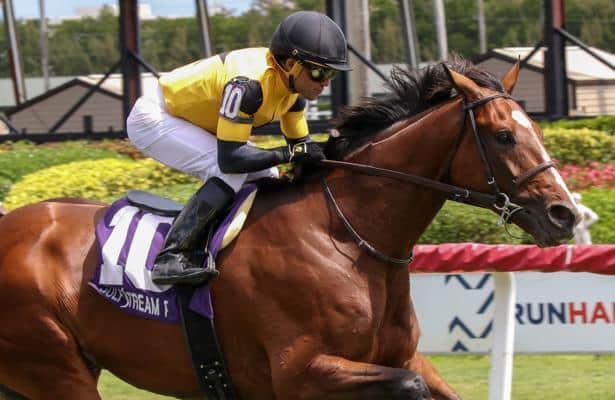 Photo: Courtesy of Gulfstream Park
Trainer Christophe Clement will saddle a formidable pair of graded stakes winners in Decorated Invader and Gufo, both of who will carry winning streaks into Saturday's 36th running of the Grade 2, $150,000 National Museum of Racing Hall of Fame over the inner turf at Saratoga Race Course.

Owned by West Point Thoroughbreds, William Freeman, William Sandbrook and Cheryl Manning, Decorated Invader arrives at the 1 1/8-mile event for 3-year-olds off a victory in the Grade 2 Pennine Ridge on June 20 at Belmont Park, where the son of Declaration of War tracked the pace while saving ground along the rail, made his move at the quarter pole and drew off to a 4 ¾-length triumph.

The win, which netted a career-best 93 Beyer Speed Figure, came after a victory in his 2020 debut in the Cutler Bay on March 28 at Gulfstream Park, where he was 15 lengths off the pace and made a five wide move to secure a three-quarter length score.

After finishing second on debut to subsequent graded stakes winner Field Pass over Saratoga's inner turf, he followed up with a turf maiden victory at the Spa over next-out winner and eventual graded stakes placed Summer to Remember.

Decorated Invader took things to the next level in striking Grade 1 gold in the Summer at Woodbine en route to a fourth in the Grade 1 Breeders' Cup Juvenile Turf at Santa Anita.

"The challenge is when you have a horse that's a standout in a short field, there's going to be a target on his back," said Terry Finley of West Point Thoroughbreds. "The break and the first eighth of a mile will be important. Ultimately, it will be up to [jockey] Joel [Rosario]. He really fits the horse. When they walk out of the paddock, you just have so much confidence and no concerns that you'll get a top class ride from him.

"It's very good to have the option to be a closer, but we have seen time and time again where you have the best horse in the race, and they [the pacesetters] don't come back," Finley added.

Decorated Invader will be stretching out to 1 1/8 miles for the first time.

"He's doing very well," Clement said. "He had a good work last Sunday at Belmont [half-mile in 47.79 seconds over the inner turf]. A mile and an eighth should be a good distance for him. We're excited to see him back."

"You can never be certain. Sometimes horses that show you and give you that indication are just not the same horse once they stretch out past a mile and an eighth," Finley said. "It's a fascinating part of our business and our industry. I would be kind of surprised if he were to not relish the added distance, but I wouldn't be stunned if he didn't. We've seen it many times. That question is still to be answered and I think we'll get a lot of answers on Saturday."

Jockey Joel Rosario, who piloted Bricks and Mortar (2017) and Raging Bull (2018) to Hall of Fame wins, will retain the mount aboard Decorated Invader from post 7.

Decorated Invader will square off against fellow Clement trainee Gufo, who won his last four starts and is a perfect 2-for-2 when going 1 1/8 miles.

Following a maiden victory on December 29 at Gulfstream Park, Otter Bend Racing's Gufo, who also is by Declaration of War, defeated winners at the South Florida oval en route to a score in the English Channel on May 2, where he gave Clement his 2,000th career victory.

Owned by Otter Bend Stables, Gufo will arrive at the Hall of Fame off two weeks rest having last raced when shipping to Delaware Park to win the Grade 3 Kent on July 4, where made up nearly 10 lengths off a slow pace, began moving into contention around the far turn and made a five wide move to secure the win by a half-length.

Clement was originally planning on training towards the $500,000 Saratoga Derby Invitational on August 15 with Gufo. But he said he likes the way his horse is training and believes that the possibility of Friday showers in the forecast could be to the horse's benefit.

"The original idea was to target the Saratoga Derby, but there's possible rain in the forecast on Friday and he came out of his last race in good order," Clement said. "It just keeps our options open, so we'll have a look at the race."

Jockey David Cohen will be aboard Gufo from post 5.

Trainer Chad Brown will seek his sixth win in the Hall of Fame when he saddles Domestic Spending for Seth Klarman's Klaravich Stables.

Unbeaten in two starts, the son of Kingman bred in Great Britain by Rabbah Bloodstock won on debut at Tampa Bay Downs on February 12 over next-out winner Maroon Maniac and returned to victory off a four-month layoff to defeat winners over a firm Widener turf course at Belmont Park on June 7.

Jockey Irad Ortiz, Jr. won two of his three Hall of Fame victories for Brown and will pilot Domestic Spending from post 1.