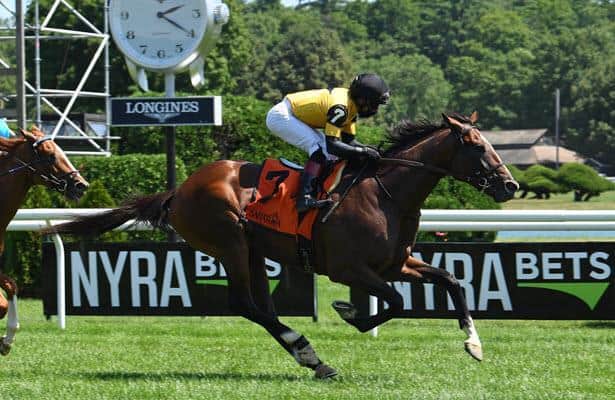 West Point Thoroughbreds, William Sandbrook, William Freeman and Cheryl Manning's Decorated Invader will see a cutback in distance when competing against fellow sophomores in Sunday's 46th running of the $150,000 Hill Prince (G2) going one mile over the Widener turf at Belmont Park.

Trained by Christophe Clement, who saddled Have At It [2018], Summer Front [2012] and subsequent multiple-champion Gio Ponti [2008] to Hill Prince triumphs, Decorated Invader arrives off a close fifth-place finish in the Saratoga Derby on Aug. 15. The son of Declaration of War tracked in second position and made a three-wide bid at the top of the stretch before engaging in a stretch battle while in-between horses, but was overtaken inside the sixteenth pole to finish three-quarters of a length back to winner Domestic Spending.

The Saratoga Derby was the first loss of the year for Decorated Invader, who captured the Cutler Bay on Mar. 28 at Gulfstream Park in his 2020 bow before winning the Pennine Ridge (G2) on June 20 at Belmont Park and the Hall of Fame (G2) on July 18 at Saratoga.

Decorated Invader will be cutting back to one mile for the Hill Prince.

"He didn't run great going a mile and three sixteenths, but he only got beat three-quarters of a length," said Terry Finley of West Point Thoroughbreds. "We aren't necessarily thinking about going past 1 1/8 miles because it's not in front of us at the moment. With Christophe, Gio Ponti is a good comparable. He was an incredibly talented horse and Christophe and the owner [Castleton Lyons] did a great job in managing him. The good thing with these types of horses is that you have good comparables. You can see the good moves and the ones that didn't work."

During his 2-year-old campaign, Decorated Invader scored a breakthrough win in the Summer (G1) last September over a yielding turf at Woodbine, which came after a second-out maiden victory over the Mellon turf at Saratoga over next-out winner and eventual graded stakes-placed Summer to Remember.

"He's getting a bit of a breather here," Finley said. "He's been at it once a month pretty much since the end of March when he made his 3-year-old debut and Christophe and his staff have done a great job with the horse."

"Declaration of War's progeny have been winning everywhere," Finley said. "They show brilliance, but it seems like they're durable on top of that. You're in a good spot when you have those two things."

With three graded stakes victories and a record of 8-5-1-0, Decorated Invader boasts the highest amount of lifetime earnings in the field with $473,035.

Jockey Joel Rosario will target his fourth stakes victory of the meet aboard Decorated Invader, who drew post 3.

Sure to show speed, the frontrunning son of Get Stormy broke his maiden last September going one mile over the Widener turf and has since been stakes-placed four times. Two starts after his maiden win, he made his sophomore debut in the Kitten's Joy (G3) on Jan. 4 at Gulfstream Park, where he attempted to wire the field at 11-1 odds but ended up finishing a half-length back to Island Commish.

Following another pair of stakes placings at Gulfstream Park in the Dania Beach on Feb. 1 and the Mar. 28 Cutler Bay, Get Smokin was second in the Hall of Fame to Decorated Invader, where he established a 7 ¼-length lead before ultimately being overtaken by the winner at the top of the stretch.

Hall of Fame jockey Javier Castellano will ride from post 1.

After sending Buy Land and See to Belmont Park to a victory last October in the Awad, trainer Steve Klesaris will seek another stakes triumph on the NYRA circuit with the Pennsylvania-bred son of Cairo Prince.

Owned and bred by Joseph Imbessi, the lightly-raced Buy Land and See did not race again after the Awad until July 28, where he bested his Pennsylvania-bred counterparts going 7 ½ furlongs over the Parx turf by 5 ¼ lengths and registered an 84 Beyer Speed Figure for the win. In his most recent start, he cut back to 5 ½ furlongs for the Mahony at Saratoga, where he closed late to get third, beaten 4 ¾ lengths to frontrunning winner Jack and Noah.

Jockey Jose Lezcano will be in the irons from post 7.

The Hill Prince honors Christopher T. Chenery's 1950 Horse of the Year, who scored victories in that year's Preakness Stakes, Jockey Club Gold Cup and Wood Memorial. Trained by Casey Hayes, Hill Prince was named Champion 2-Year-Old the year prior, when he won the Cowdin at Aqueduct. Upon retirement, Hill Prince stood at Claiborne Farm. He was inducted into Racing's Hall of Fame in 1991.