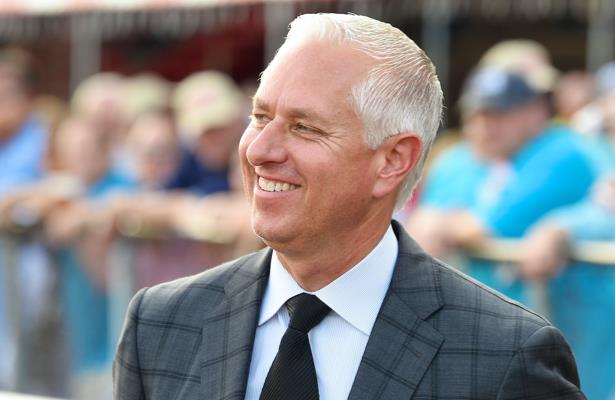 Impressive debut winners Ava's Grace and Lucifer's Lair along with Make Mischief, runner-up in the Grade 3 Schuylerville on Opening Day, headline a compact but competitive field of six for Wednesday's 104th running of the Grade 2, $150,000 Adirondack for 2-year-old fillies at Saratoga Race Course.

The 6½-furlong Adirondack is the second in Saratoga's series of three races for juvenile fillies, following the six-furlong Schuylerville on July 16 and preceding the $250,000 Spinaway (G2) at seven furlongs Sept. 6.

Trainer Todd Pletcher is a five-time winner of the Adirondack, one fewer than his Hall of Fame mentor D. Wayne Lukas, most recently taking back-to-back editions in 2016-17 with Nonna Mela and Pure Silver, respectively.

Pletcher will be represented this year by The Elkstone Group's Maryland homebred Lucifer's Lair. The bay's sire, Quality Road, won the Amsterdam (G2) in 2009 and Woodward (G1) in 2010 at Saratoga, while the dam, Devil's Cave, also was a graded-stakes winner going long on the dirt.

Lucifer's Lair was unveiled July 19 at the Spa, pressing a brisk pace going 5½ furlongs before forging a short lead entering the stretch and going on to win by three lengths in 1:05.33.

"She had trained like a filly that was capable of winning her debut. She's a pretty professional, straightforward sort so we were hoping for a good race," Pletcher said. "She was early to come in and we had a good foundation into her, so we felt like we had her pretty fit going into that. By Quality Road, you would think that she would improve stretching out, as well."

Lucifer's Lair tuned up for the Adirondack with a half-mile work in 49.49 seconds over Saratoga's main track Aug. 6. Meet-leading rider Irad Ortiz, Jr., aboard for her debut triumph, gets the return call from post 5.

"We were very pleased with her debut. She's been training good since then and had a nice breeze yesterday, so it seems like she's ready to go again," Pletcher said. "Certainly, it's going to be a tough race, but it's the logical next move."

Southern Equine Stables' homebred Ava's Grace will be making her Saratoga debut in the Adirondack, exiting a come-from-behind half-length victory in 59.38 seconds for five furlongs July 3 at Ellis Park.

The bay Laoban filly was then shipped to Saratoga where she shows three breezes over the main track, the most recent a five-furlong drill in 1:01.19 on Aug. 4 for trainer Robertino Diodoro.

"We worked her the other day and she handled it impressively. To work five-eighths by herself as a 2-year-old, she's really developing into a nice filly," Diodoro said. "It's going to be a big test for her, but she's doing everything right. What I like is she's doing everything right and her works have been a little better and a little better each time.

"I always say a big part of all these horses, but especially young horses, is the mental part," he added. "Especially with fillies. She's about as smart as they come and as classy as they come. She's a very classy filly."

Ava's Grace broke from the rail in her debut and rated in fifth before steadily making up ground to get within a neck of the lead at the top of the stretch under jockey David Cohen, who gets the assignment again from post 1.

"She wasn't as prepared a first-time starter as we usually have them. It was kind of a rush situation for a couple different reasons, but she handled everything amazingly well, from the paddock to the gate," Diodoro said. "A lot of times when you do stuff like that with a filly, you'll blow their mind, but it didn't even faze her. She's come back really well and shipped up here well. We've had her up to the gate, we've had her in the paddock. She acts like a nice, late 3-year-old filly. She's just very professional."

Diodoro said her poise may come from the sire. Also campaigned by Southern Equine with McCormick Racing, Laoban ran third in the Sham (G3) and second in the Gotham (G3) in 2016, not breaking his maiden until later that summer in the Jim Dandy (G2) at Saratoga, following off-the-board efforts in the Blue Grass (G1) and Preakness.

"We've got a couple more Laobans down at Ellis and they're all the same way. They're just very professional, they're good-looking horses and very smart horses. I know it's a new sire, but it could be a little trademark coming here," Diodoro said. "A friend of mine has got one at Prairie Meadows and without me even saying anything, he started telling me about this Laoban he's got. He said the same thing, he acts like a nice 3-year-old."

Diodoro said he will leave the decision up to Cohen but expects Ava's Grace to be among the top flight in the Adirondack.

"I think she could be closer. She broke out of the one hole last time. She's had a little more gate experience now. I think she'll be forwardly placed, very forwardly placed. It's going to be interesting. It's always neat with these young horses, to watch them develop," Diodoro said. "She's a good-sized filly. She'll grow a little more in height but, to be honest, I think she's the perfect size. She's just put together nice."

Trainer Mark Casse won last year's Adirondack with Perfect Alibi, and he'll attempt to defend his title with Gary Barber's Make Mischief. The daughter of Into Mischief, debuted with a five-furlong maiden special weight victory on June 18 at Belmont Park, then set the pace in the Schuylerville for a half-mile before giving way to finish second behind Dayoutoftheoffice.

Hall of Famer John Velazquez and Make Mischief will break from post 2.

Heider Family Stables' Thoughtfully first made headlines last summer at Saratoga by fetching $950,000 at Fasig-Tipton's Selected Yearling Sale, then ran to her price tag in debut, an 8¾-length maiden special weight romp June 11 at Churchill Downs for Hall of Fame trainer Steve Asmussen, a two-time Adirondack winner. She has breezed five times at Saratoga including a bullet five furlongs in 1:00.91 on Aug. 3.

Up on the Tapit filly in debut, Ricardo Santana, Jr. rides back from post 4.

AVQ Racing's Lilac Lace will try the dirt after graduating at first asking in a 5½-furlong turf sprint on July 12 at Keeneland. Trainer Anthony Quartarolo enlisted Hall of Famer Javier Castellano to ride from post 3.

Completing the field is Michael J. Ryan's Beautiful Farewell, winless in two starts including a fifth, beaten 2 ½ lengths, in a six-furlong maiden special weight on August 2 at Saratoga. Joel Rosario climbs aboard for the first time from outside post 6.

The Adirondack is slated as Race 9 on Wednesday's 10-race card, which offers a first post of 12:50 p.m. Eastern. Saratoga Live will present daily television coverage of the 40-day summer meet on FOX Sports and MSG Networks. For the complete Saratoga Live broadcast schedule, and additional programming information, visit https://www.nyra.com/saratoga/racing/tv-schedule.