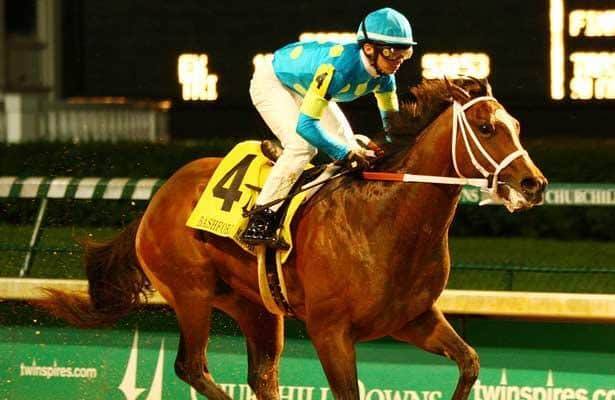 Photo: Eclipse Sportswire
Tim O’Donohue’s Debt Ceiling, the lone juvenile with stakes experience in the field of seven 2-year-olds, swept to the lead midway around the turn and drew off to a 2 ¾-length win over Hollywood Talent in the 112th running of the $107,700 Bashford Manor (Grade III) on Saturday night at Churchill Downs.
The Bashford Manor was the second of three stakes races run under the lights as part of Churchill Downs’ special “Downs After Dark Presented by Stella Artois and Finlandia Vodka” nighttime racing program. The race was delayed 14 minutes by inclement weather – specifically lightning. When the “all clear” was given by Kentucky Racing Commission Stewards, Debt Ceiling ran six furlongs over the main track labeled “sloppy” in 1:10.66. The Mid-Atlantic-based combo of jockey Eric Camacho and trainer John “Jerry” Robb collected their first victories beneath Churchill Downs’ Twin Spires. My Corinthian took the field through a swift first quarter-mile in :20.93 with Hollywood Talent racing to his outside and Debt Ceiling tracking three-wide down the backstretch. With three furlongs to run, Debt Ceiling made a sweeping move into the teeth of the rapid fractions and quickly took command midway through the turn. The winner opened up a clear lead in the stretch and easily prevailed under wraps. “This is my second stakes horse, but I have a feeling this is going to be the best horse I’ve ever owned, said O’Donohue, 50, of Parkland, Fla. Debt Ceiling, a Kentucky-bred dark bay or brown son of Discreet Cat out of the Marquetry mare Top Marks, paid $12.40, $5.40 and $4.20 as the 5-1 third betting choice. Hollywood Talent, ridden by John Velazquez, returned $4 and $3.20. My Corinthian, with Luis Garcia up, was another 2 ½ lengths back in third and paid $5.20. Runkle, favored D’cajun Cat, Gun Roar and Sandbar completed the order of finish. D’cajun Cat, a 5 ¼-length debut winner, contended three wide in the early stages but lacked a response when called upon. Debt Ceiling has a perfect three-for-three record. After breaking his maiden by 4 ½ lengths at Laurel in March, he scored a 2 ½-length win in the Rollicking at Pimlico on May 18. The $65,439 winner’s share of the purse doubled his earnings to $132,099.
First run in 1902, the Bashford Manor – the first open graded stakes race of the year for 2-year-olds – is one of Churchill Downs’ most storied races. It is named for the former Louisville Thoroughbred breeding and racing farm that dominated the American racing scene in the early 1900s. George J. Long, a wealthy foundry owner, purchased Bashford Manor Farm in 1887 and developed his Thoroughbred operation that provided him two Derby wins as an owner, 1892 (Azra) and 1906 (Sir Huon), and three as a breeder, 1892 (Azra), 1899 (Manuel) and 1906 (Sir Huon). In addition, Bashford Manor also won the Kentucky Oaks in 1894 (Selika) and 1915 (Kathleen). The original Wilder family owned Bashford Manor. The Wilders were direct descendants of Lord Baltimore, whose English home was also called Bashford Manor. Long died in 1930 and the farm was eventually sold in 1973 to make way for the development of a mall complex, fittingly named Bashford Manor, that formally closed in 2003.
Earlier on the 11-race program, Right to Vote won the $60,325 Kelly’s Landing, an overnight stakes for 3-year-olds and up. The 4-year-old gelded son of Political Force clocked seven furlongs in 1:22.44 under leading rider Shaun Bridgmohan, who collected his sixth stakes win of the meet, to beat favorite Laurie’s Rocket by five lengths. Owned by J. Lee Didier’s B J D Thoroughbreds, LLC and trained by Ron Moquett, Right to Vote, who paid $12.20 to win as the 5-1 longest-priced horse in the field of four, banked $39,360 and improved his record to 12-4-2-3—$233,864.
Racing at Churchill Downs continues Sunday with a 10-race program that begins at 12:45 p.m. ET. Sunday is closing day of the 38-day Spring Meet.
BASHFORD MANOR QUOTES
Tim O’Donohue, owner of Debt Ceiling, winner: “This is my second stakes horse, but I have a feeling this is going to be the best horse I’ve ever owned.”

Q. You will probably get some offers for this horse. Would you consider selling him? “You know when you’re a little kid and you have dreams? My dream was this. I don’t think you can put a price on it. The price would have to be something that boggles the mind to quit this dream right now.”

Q. What are your thoughts on winning this race where they run the Kentucky Derby next spring? “It’s absolutely amazing. I was lucky enough to come here in 2007 when my brother-in-law (Mario Pino) rode Hard Spun in the Kentucky Derby. That was as close to the dream as I’ve gotten. My wife and I both said that we’re not coming back to the Derby until we have our own horse in it. Who knows? It’s a little early, but you can always dream.”

Note: Tim O’Donohue, 50, lives in Parkland, Fla. and owns an IT staffing business. He owns seven horses in training and says he has owned horses for 30 years.
Jerry Robb, trainer of Debt Ceiling, winner: “The first race, I didn’t expect him to win. He did it on raw talent. The last two races, we went in feeling very confident. There were really no other races on the east coast for him. This was the closest around and I’m glad we came.”
Q. Were you worried at all about running on a sloppy track? “Well I was watching the races earlier and speed was winning everything. So I figured the rain could only help us.”
Q. How good do you think this horse is? “He’s done everything I’ve asked him to”

Q. Where do you go from here? “We’ll probably go to Saratoga with him.”

Eric Camacho, rider on Debt Ceiling, winner: “We’ve always known this horse has had talent. The plan today was to let the two speed horses (My Corinthian and Hollywood Talent) go and sit off them. So I just sat back and took my time. When it was time to go, he told me when to go. I passed them so fast. I was a little worried that I moved too early, but I had so much horse that when it was time to go I had to go.”
John Velazquez, rider on Hollywood Talent, runner-up: “He ran very green, with the track obviously being wet and the shadows from the poles and everything.  He ran a good race, but I thought he could have run better than that.  He was going fast, but he was not really paying attention to what he was doing.”
Dane Kobiskie, trainer of My Corinthian, third: “I was super impressed.  This horse is not very focused in the morning and he’s done everything so easily. So it was his first experience to actually realize what’s going on in his races now.  So I expect him to move forward leaps and bounds after this race.  He’s naturally a very fast horse.  I didn’t know he was that quick.  I knew he was quick, but I didn’t know he was that quick.  So I’m happy.”
Luis Garcia, rider on My Corinthian, third:  “He’s a nice horse.  It was his second time out and on the mud, and he didn’t feel like he was going that fast. But he’s a real nice horse.  He’s still getting his mind in the game and all that, but at this rate he’ll be tough.” (Note: this was Garcia’s first mount at Churchill Downs)
Rosie Napravnik, rider on 6-5 favorite D’cajun Cat, fifth: “I don’t know. He just wasn’t the same horse I rode last time.”
Hollywood Talent Runkle Gun Roar My Corinthian Right To Vote Debt Ceiling Laurie's Rocket D'cajun Cat Sandbar John R. Velazquez Ronald E. Moquett Luis Garcia Rosie Napravnik John J. Robb Dane Kobiskie Shaun X. Bridgmohan Eric Camacho Churchill Downs Bashford Manor Bashford Manor (2013)