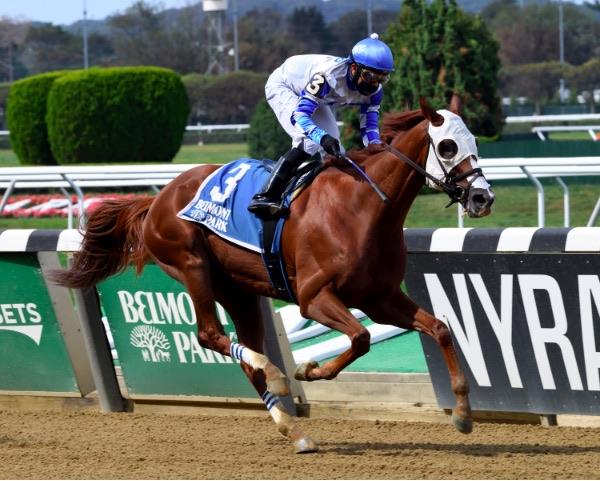 Stakes action at the Belmont Park fall meet kicked off with a wire-to-wire victory from Danny California in the inaugural running of the $80,000 Miner's Mark for 3-year-olds and up going 1 1/2 miles over the main track labeled fast on Opening Day Friday.

Piloted by Manny Franco - the leading rider at the 2019 Belmont Park fall meet - Danny California broke sharply from post 3, leading the five-horse field into the first turn through an easy opening quarter-mile in 26.22 seconds with Petit Fils to the outside in second and You're to Blame one path to his inside along the rail.

Through a half-mile in 52.40 seconds, Danny California maintained his advantage while under Franco's tight hold. You're to Blame made up ground in between horses and put himself just to the outside of Danny California heading into the far turn.

Approaching the quarter pole, Franco peeked over his shoulder several times and began asking more from his charge as You're to Blame put in his outside bid. The two horses slugged it out in the stretch run, but Danny California had enough in reserve to post a 1 3/4-length victory in a final time of 2:33.01.

"I wanted to warm up my horse real good because on paper, it didn't look like there was much speed," Franco said. "My plan was to make the lead and see what the horse could do. He enjoyed it. He was nice and comfortable, and he was there for me the whole way. When he [You're to Blame] got close to me, my horse responded and I knew it was going to be hard to get to me. My horse fought hard all the way to the line.

"I thought I was going pretty slow and I could feel my horse relaxed a lot," Franco added. "When he came to me on the backside, my horse started getting into the bridle."

You're to Blame was another 12 ½ lengths ahead of Rocketry, who closed late for third. Counter Offer and Petit Fils completed the order of finish.

Hall of Fame jockey John Velazquez, aboard You're to Blame, said he made an early bid by design.

"I made a little move down the backside to try and catch up with them early because I know he doesn't run the turns very good," Velazquez said. "I was right there with them, but we couldn't catch up."

Owned by Noda Brothers and trained by Orlando Noda, who secured his first career stakes win, Danny California arrived at the Miner's Mark off two allowance victories going 1 1/8 miles at Saratoga. He has now won three in a row, starting with a seven-length score on July 29 at the Spa before following with a 1 1/2-length victory over the same track on August 27.

Bred in the Empire State by West Point Thoroughbreds and 3C Thoroughbreds, Danny California is by 2005 Preakness and Belmont Stakes winner Afleet Alex and is out of the El Corredor mare Cinco de Mayo Mio.