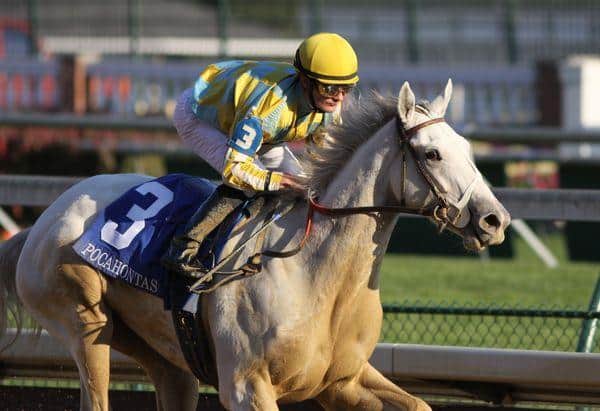 With champion Awesome Feather (Awesome of Course) sidelined by a tendon issue, DANCINGINHERDREAMS (Tapit) and R HEAT LIGHTNING (Trippi) are the leading three-year-old fillies in training in South Florida, and the two runners will open 2011 against each other in Sunday's $200,000 Forward Gal S. (G2) at Gulfstream Park. A total of seven fillies are entered in the seven-furlong test.

Dancinginherdreams couldn't have been more impressive in her two previous starts, winning both races from off the pace by widening margins. She swept past maiden special weight rivals with a breathtaking move in her career bow, scoring by five lengths in a six-furlong event over Keeneland's Polytrack, and displayed the same acumen when switching to dirt in the one-mile Pocahontas S. (G3) at Churchill Downs, rallying with ease to a 5 1/4-length decision. The John Ward-trained gray shows a couple of bullet workouts this month at Palm Meadows, and Julien Leparoux will return to the saddle aboard the late runner.

R Heat Lightning rallied last to first in the Spinaway S. (G1), posting a four-length victory, and finished a troubled second in the Frizette S. (G1) next time out. The Todd Pletcher runner displayed new tactics when concluding her two-year-old campaign with a very encouraging performance in the Breeders' Cup Juvenile Fillies (G1), setting most of the pace before weakening to second in deep stretch, and it will be interesting to see how much speed she shows Sunday. She appears to be training forwardly in preparation, drilling a five-furlong bullet workout in 1:00 4/5 last weekend at Palm Meadows, and John Velazquez will guide the bay lass.

Masteroffoxhounds takes them all the way in John Henry
Comfortable throughout, Phil D’Amato’s Masteroffox...

Sunday Play: The Great Maybe can win Frizette Stakes
As stated before, bettors face a risk in taking a...
x