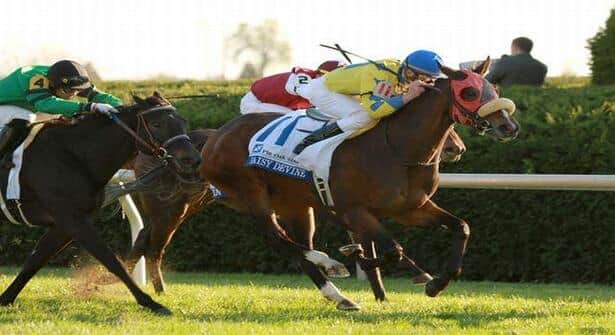 Last spring’s Fair Grounds Oaks winner Daisy Devine proved she could transfer her abilities to the local grassy going by winning the 25th renewal of the $75,000 Pago Hop Stakes by 2 1/4-lengths over the newly-reconditioned Stall-Wilson turf course at the Crescent City oval on Saturday.

The daughter of Kafwain trained by Andrew McKeever stalked the pacesetting Love Dare, owned by Pete and Barb Horton, took command from that one at the asking of jockey James Graham entering the lane and then drew off with mild urging in the late stages.

“We were a little concerned how she’d handle the turf down here, but I knew she could handle the grass as soon as I worked her three-eighths on the grass at Keeneland last month (before she won Keeneland’s Grade III Valley View Stakes Oct. 21.),” said Graham immediately after the Pago Hop.

“This race (today) was the plan all along,” said McKeever. “From here we’ll sit chilly and play it by ear. We might stick to the turf for awhile, especially if (trainer) Larry Jones brings his good filly (Havre de Grace) down here.”

Virginia Kraft Payson’s Ruthenia rallied to gain the place in the Pago Hop, paying $3.20 and $2.60, while John Fielding and Frederick Hertrich III’s Poof Too closed to finish one length farther back in third and returned $3.

Racing resumes Sunday with a nine-race program beginning at 12:40 p.m.

In the sixth race, billed as the “Fair Grounds Legends Purse,” Louisiana-bred Deelightful Angel, playing the part of 1988 Preakness and Belmont winner Risen Star, won by an easy 6 ¼ lengths in a one-mile-and-70-yard $10,000 claiming contest for Louisiana-breds. Every entrant in the 12-horse field was dressed in the silks of a different legendary horse from Fair Grounds’ 140-year history. Louisiana Derby and New Orleans Handicap winner Master Derby, played by Kasos Pride, finished second and favored Whirlaway, the 1941 Triple Crown winner, represented by Gold Soul, came in third.