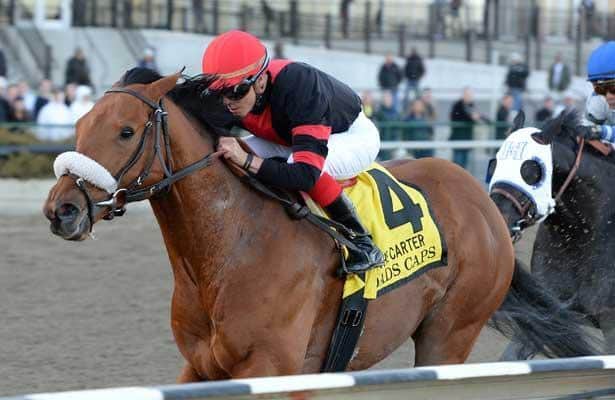 Two-time Grade 1 Carter Handicap winner Dads Caps is set to make his first start in more than seven months this weekend at Aqueduct Racetrack, tracing his steps en route to a possible title defense in April in a redrawn field for the Grade 3, $150,000 Toboggan.

Rescheduled for the second time from its original Martin Luther King, Jr. Day card, the six-furlong Toboggan is carded as Race 9 with a post time of 4:20 EST on Saturday's special 10-race program, which will also feature the Grade 3 Withers and the New York Racing Association's first giveaway of 2016. Free with the purchase of a racing publication, including the Post Parade program and Daily Racing Form, fans are eligible to receive a giveaway coupon to receive an Aqueduct knit hat & a pair of "smart gloves", while supplies last.

A millionaire son of Discreet Cat owned and bred by Vincent Scuderi, Dads Caps hasn't run since finishing third in the Grade 2 True North on June 5 at Belmont Park, after which he was sidelined with a small knee chip that extended an already scheduled layoff, according to trainer Rudy Rodriguez.

Dads Caps, whose share of the True North purse money pushed his career earnings just past the seven-figure mark, has worked steadily over the inner track since early December at the Big A, sparking the confidence of his trainer.

Dads Caps, now 6, still found plenty of success despite his shortened campaign in 2015. Following the same course as the year before, Dads Caps used runner-up finishes in both the Toboggan and the Grade 3 Tom Fool in March to prepare for the ultimate spring goal of the Carter, the first Grade 1 for older horses on the NYRA racing calendar, a target Rodriguez hopes Dads Caps can hit again for a record third year.

"We've definitely got the Carter in mind," said Rodriguez. "Usually when they're away from the races that long, they look like they need a race. Hopefully, this is something to move forward from. He looks like he runs good fresh, so hopefully we can get a decent race and maybe just freshen him up and take it from there. But if there's another race coming up, maybe we can try him again. We're still a long way from home."

Dads Caps' Toboggan bid will also feature a rematch with 2015 Carter runner-up Green Gratto, who could figure to be the biggest obstacle on Dads Caps' return to the winners' circle on Monday. Installed at 5-2 on the morning line, Dads Caps is set to leave from the outside post 4 with regular rider Jose Ortiz aboard.

"We're ready, we're anxious to see him run back," Rodriguez said of his charge, whose 2014 Carter win gave the former jockey his first Grade 1 training victory. "If he can perform the way he was running last year, we'll be in good shape. He's just got to run his same race because Green Gratto is a tough customer right now."

Green Gratto, who has raced 11 times since his meeting with Dads Caps in the Carter, has posted triple-digit Beyer Speed Figures in each of his last three races, capped off with a season-ending and career-best 107 Beyer for his 5 ¾-length victory in the Gravesend onDecember 26 over the Aqueduct inner track.

Ending the 2015 season with a 3-4-4 record from 16 starts, Green Gratto further validated his second-place finish in the Carter at 53-1 with a late-year graded stakes win of his own, beating multiple Grade 1 winner Palace by a head to take the Grade 3 Fall Highweight on November 26.

Trained by Gaston Grant, who co-owns the Here's Zealous horse with Anthony Grant, Green Gratto is installed as the tepid 2-1 morning-line favorite. The 6-year-old New Jersey-bred will be ridden by Kendrick Carmouche from post 8.