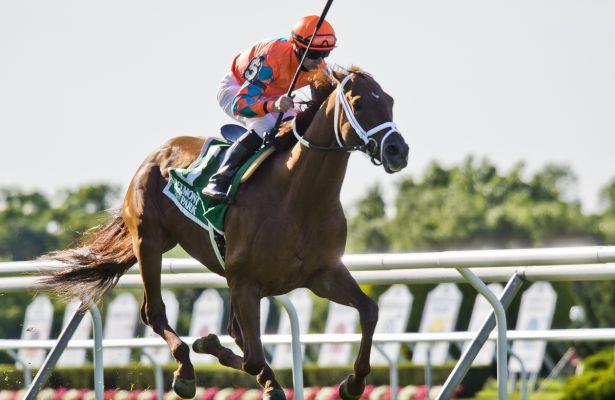 The 5th running of the Grade III $300,000 American St. Leger drew a field of 11 for the marathon race to kick off a $200,000 guaranteed all graded-stakes Festival Pick-4 on Aug. 13 at Arlington International Racecourse. Headlining the 1 11/16-miles turf contest will be Grade II winner Da Big Hoss. Claimed by trainer Mike Maker for owners Skychai Racing last June for $50,000, the 5-year-old son of Lemon Drop Kid has since won five stakes races when stretching out beyond 1¼ miles, including three graded stakes wins. The winner of the Grade II Elkhorn Stakes at Keeneland earlier this year, he is coming off a 1½-length win in the two-mile Belmont Gold Cup in June. Florent Geroux retains the mount and will break from gate five.

Moroccan-bred Billabong (MOR) will be the first of his kind to run in the United States since 1991. Runner-up in the Group I The Emirs Trophy in Dohan, Qatar for his first and only start of the season, Jalobey Racing’s 7-year-old is a four-time stakes winner. Trainer Pascal Bary will leg up Flavian Prat, who will ride from post 10.

Third in the Grade III Arlington Handicap last month, trainer Graham Motion has opted to put Gestut Brummerhof’s Messi (GER) into the longer stakes on the card. A stakes winner in Germany, the 6-year-old son of New Approach (IRE) won the Grade III Knickerbocker Stakes last October and will be making his third start of the season. Arlington’s leading rider Jose Valdivia, Jr. will guide the gelding from post nine.

Coming off a win over hurdles in Ireland is Act D Wagg Syndicate’s Clondaw Warrior (IRE), who will be ridden from gate eight by Seamie Heffernan. Started in 38 races, the 9-year-old gelding by Overbury (IRE) finished second last October in the Group II Doncaster Cup in England. He is trained by William Mullins who is well known for his success with racehorses over jumps. Another Irish-bred in the field is Midwest Thoroughbred’s Montclair (IRE). The gelding won multiple stakes in France including the Group III Prix de Barbeville before coming to the United States last summer. The 6-year-old son of Montjeu (IRE) will be making his sixth start stateside, for which trainer Danny Gargan will leg up Hall of Fame rider Mike Smith to guide the recent claim from post two.

Peacock Stable’s O’Prado Ole will be breaking from the outside under Corey Lanerie. Second in the Grade III Stars and Stripes on Million Preview Day twice now, the Dale Romans trainee is looking for his first stakes win while stretching out past 1½ miles. Trainer Rafael Fernandez will call on Carlos Marquez, Jr. to guide 7-year-old Tobias from gate four. The Arch gelding will be trying to improve on his best stakes performance when fifth by 4¼ lengths behind Da Big Hoss in the Grade III Kentucky Turf Cup. A Group III winner two starts back, Wasir (GER) will be looking to rebound for trainer Andreas Wohler and owner Darius Racing after an 11th-place finish when trying Group I company for the first time in June. The 4-year-old colt by Rail Link (GB) will be ridden by William Buick from post six.

Kenneth and Sarah Ramsey will send out two entrants with trainer Mike Maker. From the rail, Robby Albarado will ride Generous Kitten, a 5-year-old homebred by Kitten’s Joy. The gelding finished fourth in his most recent start, beaten only 1½ lengths in the Grade III Singspiel Stakes. Shaun Bridgmohan will take the mount on Rocket Professor, who will break from post seven. A recent claim, the 7-year-old gelding was a stakes winner as a juvenile, but despite 15 wins in 40 lifetime starts the veteran is winless in five tries this season.

Completing the field is Mellon Patch’s Hart Hills Road. Trained by Michael Campbell, the 5-year-old gelding by Tapit will be making his fifth start of the season at the Chicagoland oval. Stretching out past 1 1/16 miles for the first time in his career, he will break from post three under rider Santo Sanjur.