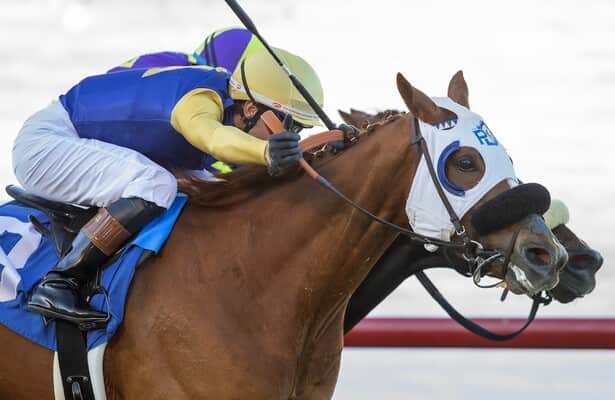 With his usual abundance of riches across all turf divisions, trainer Phil D’Amato shared plans on Saturday for several of his top stakes horses.

“He had a little working vacation,” D’Amato said of the past seven weeks for Hong Kong Harry. “I really didn’t want to turn him out, but I want to have a fresh horse later in the year with a chance to run in the Breeders’ Cup. I’m going to pick out his races so he runs just a handful of times. Hopefully he’ll be ready when the Breeders’ Cup comes around.”

Expected to join Hong Kong Harry in the Kilroe Mile is multiple stakes-winning stablemate Balnikhov. The 4-year-old Irish-bred most recently finished second by a nose as the favorite in the Mathis Mile (G2) on Dec. 26.

Returning to work on Saturday for D’Amato was multiple stakes winner Comanche Country. Last year, the Irish-bred daughter of Highland Reel won both the Del Mar Juvenile Fillies Turf at Del Mar and Surfer Girl (G3) at Santa Anita. She was subsequently shipped to Keeneland for the Breeders’ Cup Juvenile Fillies Turf where she finished seventh with a bit of trouble on Nov. 4.

“For the company she faced, I thought she held her own pretty well,” D’Amato said of Comanche Country’s Breeders’ Cup run. She got in a little tight late. If she didn’t get closed off, I think she would have had a chance to hit the board. She didn’t disgrace herself and I’m looking for big things from her this year.”

He added Comanche Country will get the year started in the one-mile China Doll on March 18.

D’Amato’s first stakes win of the meet came with Rhea Moon in the American Oaks (G1) on opening day Dec. 26. The American Oaks was her third win in a row following previous score in an allowance at Del Mar in August and the Autumn Miss (G3) at Santa Anita on Oct. 29. Rhea Moon has not worked back since the American Oaks.

“We’ll see what we do with her. She’s getting a little working vacation for now and we’ll see about a stakes in March to kick off her 2023 campaign.”