Cyberknife could create another fond Pegasus memory for Cox 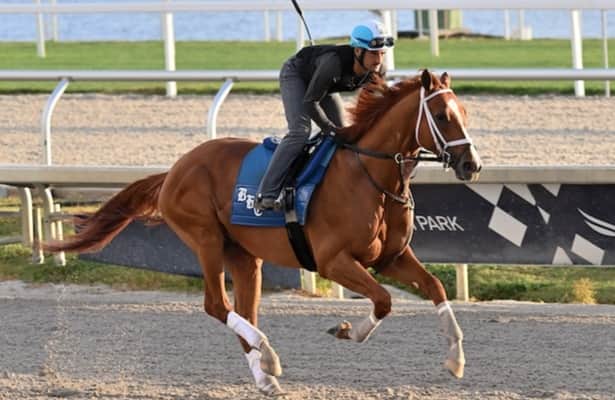 When Knicks Go won the 2021 Grade 1 Pegasus World Cup Invitational at Gulfstream Park, the $3 million total purse marked the most lucrative race that trainer Brad Cox had won to date in his skyrocketing career.

That still ranks as Cox’s second-richest victory, with Knicks Go going on to take the $6 million Breeders’ Cup Classic (G1) in his horse of the year season of 2021. At some point, Cox could add another $3 million race triumph if Mandaloun becomes the official winner of the 2021 Kentucky Derby (G1) after the disqualified Medina Spirit’s court battle runs its course.

Last year, Knicks Go fell short of becoming the first two-time winner of the Pegasus World Cup since the Donn Handicap was rebranded in 2017, finishing second behind another sensational horse in Life Is Good. Saturday, Cox will try to match Hall of Fame trainer Bob Baffert (Arrogate in 2017, Mucho Gusto in 2020) as a two-time Pegasus winner, sending out Cyberknife, runner-up by a head in the Breeders’ Cup Dirt Mile at Keeneland in his last start.

A victory with the 5-2 program favorite for the Pegasus also would be Cox’s 20th in a million-dollar race in less than five years – and that’s not counting Mandaloun’s Derby.

“The Pegasus is the first Grade 1 of the year that we run in America,” Cox said by phone from New Orleans. “It was a big deal and very special to win with Knicks Go. When you look at the Pegasus’ past winners — the Arrogates and the Gun Runners, City of Light — it’s a very good list of horses that have been able to win the race. To be able to add your name besides those is very prestigious. It’s now the premier race for older horses in America for the first half of the year.”

Knicks Go came into the 2021 Pegasus off a victory in the 2020 Breeders’ Cup Dirt Mile at Keeneland, with Cox taking a record-tying four wins over the Cup’s two championship days to sew up his first of two straight Eclipse Awards as North America’s outstanding trainer. Knicks Go had never before contested the Pegasus’ 1 1/8-mile distance, but he rolled to a front-running 2 3/4-length victory over local favorite Jesus’ Team to kick off a horse of the year campaign that included Saratoga’s Whitney (G1), Churchill Downs’ Lukas Classic (G3) and Prairie Meadows’ Cornhusker (G3) as well as the Breeders’ Cup Classic.

The Pegasus’ timing also allows horses to get one last big-money race in the spotlight before retiring to stud, such as Gun Runner and City of Light, and that was the plan for Knicks Go last year. Life Is Good had another plan, taking a clear lead at the start with Knicks Go chasing him throughout in second.

“He was very good at that point in time,” Cox said of Knicks Go at last year’s Pegasus. “We were a more accomplished horse, having won multiple Grade 1 races leading up to that, winning the Breeders’ Cup Classic and reigning horse of the year. I felt like we were the champion, but after that race, we knew there was a new kid on the block with Life Is Good, for sure. He’s obviously an extraordinary talent and went on to have a big year himself. He pretty much got the jump on us and never looked back.

“I was happy with the way Knicks Go ran. It’s not as if he just didn’t run. He just wasn’t good enough to beat Life Is Good that day,” he added. “But I do think the long campaign had maybe started taking a toll on him.”

“It’s really neat, a great concept that Gulfstream started several years back,” Cox said. “I told someone earlier, this will be our third straight year of running in the Pegasus and our fourth year running overall because we ran a horse (fifth-place Arklow) in the Pegasus Turf four years ago. It’s a very, very good day of racing. It has the atmosphere of the Breeders’ Cup, Kentucky Derby or a Triple Crown event. There are a lot of people on hand, in a great climate in January — a great event to be a part of.”

Cox said Cyberknife has worked better for his career finale than any time he’s had the son of Gun Runner, the 2017 Horse of the Year and 2018 Pegasus winner. He said he has every bit the same confidence in a big performance by Cyberknife that he had before Knicks Go’s two Pegasus appearances.

“I wouldn’t change anything we’ve done with him over the last few months since the Breeders’ Cup,” he said. “The horse is phenomenal physically, mentally and his works have been really good. If we have a good week, we’re going to be in great shape.

“When we ran Knicks Go the first time, there was a bit of a question as to how far he really wanted to go,” he added. “We thought Gulfstream would be a good opportunity to give him the chance going a mile and an eighth, and he obviously was able to get it done the first year. But I really like where we are with this horse.”

Jockey Florent Geroux, also Gun Runner’s regular rider, is one win away from his 2,000th career victory. He has a mount apiece Thursday and Friday in New Orleans and four on Saturday’s undercard at Gulfstream before riding Cyberknife in the Pegasus.