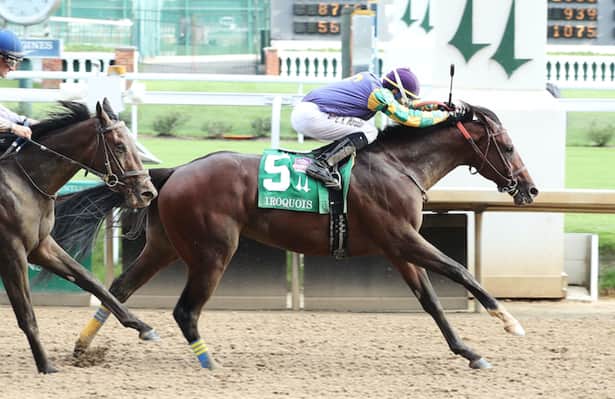 Curly Jack, winner of the Grade 3 Iroquois Stakes, headlines a field of nine 2-year-old colts that were entered in Saturday’s 96th running of the $400,000 Kentucky Jockey Club (G2), a points prep race on the road to the Kentucky Derby.

The Kentucky Jockey Club, run at 1 1/16 miles, will award the top five finishers points on a 10-4-3-2-1 scale toward a spot in the starting gate for the $3 million Kentucky Derby.

First post Saturday is 1 p.m. EST, and the 12-race program features all 2-year-old races as part of “Stars of Tomorrow II.” The Kentucky Jockey Club will go as Race 11 at 5:56 p.m. The card also will include the Golden Rod (G2), Ed Brown and Fern Creek.

Curly Jack began his march on the road to the Kentucky Derby when he scored a 10-1 upset win in the Sept. 17 Iroquois. The son of Good Magic made his debut at Churchill Downs on June 2, where he drew away to a four-length maiden special weight victory under jockey Colby Hernandez.

In his first stakes try, Curly Jack finished fifth, beaten 5 3/4 lengths, in the Sanford (G3) at Saratoga. The Tom Amoss trainee returned in the Ellis Park Juvenile where he was narrowly defeated by Top Recruit.

In his last start, Curly Jack attempted Grade I glory in the Breeders’ Cup Juvenile but finished fifth. Jockey Edgar Morales will be in the irons for the Kentucky Jockey Club, and the duo will break from the rail.

Another stakes winner who was entered in the Kentucky Jockey Club is Awad winner Freedom Trail. Trained by John Terranova, who won the 2014 Kentucky Jockey Club with El Kabeir, Freedom Trail has raced exclusively on the turf in his first two starts. He broke his maiden on Sept. 25 during the Belmont meeting at Aqueduct and returned for a 3/4-length score in the 1 1/16-mile Awad. The son of Collected will be ridden by Florent Geroux from post 6.

Trainer Kenny McPeek has won two of the last four runnings of the Kentucky Jockey Club with Signalman (2018) and Smile Happy (2021). The veteran conditioner entered two colts in this year’s contest: maiden special weight winner Denington and Street Sense (G3) runner-up Hayes Strike. Denington will be ridden by Brian Hernandez Jr. from post 3, and Hayes Strike will break from post 7 with Rafael Bejarano.