Curlin's Approval shortens up in Inside Information 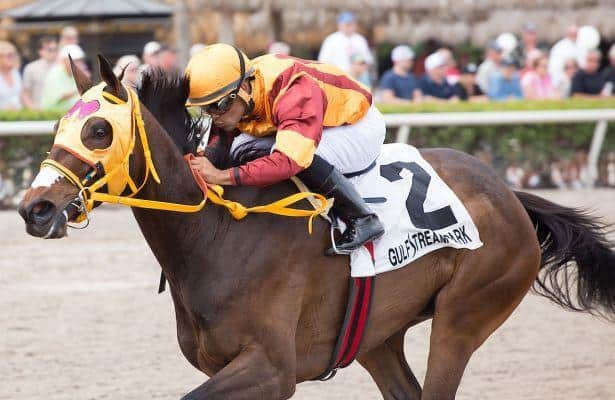 Photo: Arron Haggart/Eclipse Sportswire
If you subscribe to the notion that sometimes you have to take a step back to take a step forward, you will understand why owner Happy Alter has targeted a sprint race for Curlin’s Approval’s next start following her brilliant performance around two turns in the Royal Delta (G2) at Gulfstream Park Feb. 18.
Alter’s homebred was impressive in winning the 1 1/16-mile Royal Delta, which marked her first attempt at navigating two turns. After effortlessly moving into the lead around the far turn, the 4-year-old kicked home a six-length winner.
The daughter of Curlin, who is trained by Marty Wolfson, is  now turning back in distance to run in the seven-furlong Inside Information (G2) at Gulfstream Park this Saturday. Curlin’s Approval will face seven others in the $200,000 stakes, which is a steppingstone, Alter said, to a lofty goal he has for the filly, down the road.
“Even though I don’t like to go backwards from a mile and a sixteenth to seven-eighths, the race is here in our backyard, and she doesn’t have to travel,” said Alter, who manages and oversees the filly’s daily training. “It’s also a Grade 2, and she has proven to be very versatile distance-wise.
“The race we’re aiming for is 48 days from this race. It’s a Grade 1 at Churchill [La Troienne, May 5] going a mile and an sixteenth,” he added. “Usually she does well with her races every month or six weeks, so this race Saturday is [four weeks] from the Royal Delta. She’s shown in the past that kind of spacing is good for her. She is carrying her weight well. I don’t breeze her numerous times between races.”
Curlin’s Approval is not a need-the-lead horse, but has  enough tactical speed to place herself forwardly if a slow pace developed. But three of Curlin’s Approval’s rivals in the Inside Information,  stakes winners Dearest, Moment of Delight, and Mia Torri, are speedy types, which could result in a lively pace.
“Dearest is one of the finest sprinters in the country, but she wouldn’t be able to handle us in a two-turn race,” Alter said. “That said, this is a sprint race so we’re just going to have to adapt to that and move at the right time.”
Luis Saez, aboard for Curlin’s Appoval’s wins in the Royal Delta and before that the Hurricane Bertie (G3), has the call from post 8.
Launching her seasonal debut in the Inside Information is Gelfenstein Farm’s Dearest, whose stellar 2016 campaign featured four wins, three of the them in stakes, from six starts.
Trained by Gilberto Zerpa, Dearest hasn’t run since winning the Sugar Swirl (G3) at Gulfstream Park Dec. 17, but her recent works, including a bullet 59.40 for five furlongs at Gulfstream Park West, suggests she is ready to roll.
Edgard Zayas rides Dearest from post 5.
Dearest’s connections also entered Danessa Again, who seeks her first stakes victory. The Blame filly is winless in three starts since capturing a first-level allowance race last September at Gulfstream.
The David Fawkes-trained Moment of Delight, a multiple stakes winner in Florida-bred company, takes a step up in the Inside Information after winning the White Pearl Stakes at Gulfstream Park Feb. 18. In her only meeting with Curlin’s Approval, Moment of Delight finished second to that rival in the Added Elegance Stakes last August at Gulfstream.
“Looking at this race, I think my horse will be very competitive,” Fawkes said. “Curlin’s Approval is the horse to beat. But let’s see what happens . . . she ran a big race last time, so maybe she bounces a little or something.
“My horse seems to have a little more confidence on the lead and she is tenacious and she does not give up,” he added. “But if you look at her past performances she has also sat second or third. Seven-eighths seems to be her best distance because she doesn’t have to rush. She’s a little better if she can break and the rider can have her on the bridle.”
Paco Lopez has the call on Moment of Delight, who will exit post 7.

Mia Torri enters the Inside Information after winning the six-furlong Sunshine Millions Distaff in January. Also in the field is Distinta, the runner-up to Moment of Delight in the White Pearl. Wheatfield, a Louisiana-bred, ships in from the Fair Grounds for trainer Danny Pish. A minor stakes winner, Wheatfield is making her first start in a graded race. Completing the field is Summer Reading, who prepped for her Inside Information assignment by winning a second-level allowance here last month.