Cupid wins his comeback in the Gold Cup at Santa Anita 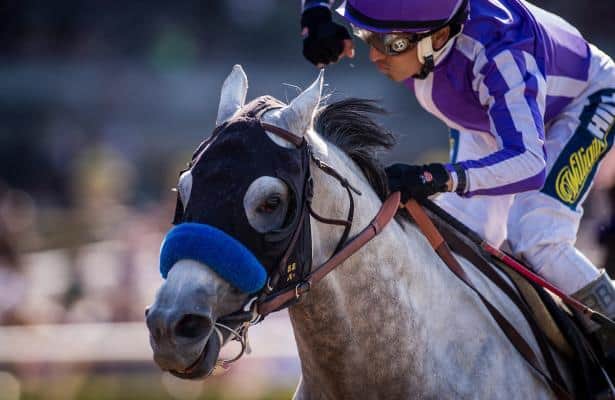 Eight months was worth the wait. Bob Baffert knew exactly what he was doing when he entered Cupid in the $500,000 Grade 1 Gold Cup at Santa Anita off a long layoff. While all eyes were on stablemate and favorite American Freedom, it was the grey son of Tapit who stole the show by 3 ¼ lengths.

As the gates opened ahead of the 1 ¼ miles test, American Freedom and Martin Garcia broke from the one hole and veered right, while Jamie Theriot guided Prime Attraction, two spots to the right of American Freedom, toward the rail. The move caused Follow Me Crev and Kent Desormeaux to get pinched in between the two horses and pushed to the back of the field.

Once American Freedom straightened out with his feet under him, Garcia assumed the lead and led the field through the first half-mile in fractions of :23.04 and :46.52. Prime Attraction took up the second position on the outside, with Midnight Storm and Flavien Prat settling in third. Rafael Bejarano, who received a clean break with Cupid from post six, sat in fourth. It was an eight length gap back to Follow Me Crev and Hard Aces. Big John B trailed far behind.

American Freedom was able to lead comfortably through three-quarters of a mile in 1:10.62, but Midnight Storm and Cupid were on the move. Prime Attraction proved no factor as the advancing duo took on a tiring American Freedom. Garcia asked for more, but his lead vanished before the turn for home.

Midnight Storm and Cupid lined up in the final stretch, with Cupid taking the wider turn of the two. When set down for the drive, Midnight Storm failed to respond and Cupid continued to increase the gap between the two, hitting the mile mark in 1:35.37. Follow Me Crev, who had been shut out at the start, made a strong rally and flew home on the outside. It was a courageous effort following a horrendous start, but Cupid and Bejarano were too far gone to be caught. The winning team hit the wire in 2:00.89 as the clear victors.

“My horse broke really well,” Bejarano said. “I put a little pressure on at the half-mile pole. When I got to the stretch and was in the clear I thought I had a lot of horse and the race was over.”

“Cupid, off that long layoff, his class showed up and he’s been working so well," Baffert stated. "I switched the riders around a little. I told Bejarano that he was going to ride Cupid. He liked American Freedom but I wanted to do it differently. He felt so much better when he came back. He told me I was right. I’m happy for Bejarano."

“Cupid has changed a lot. He’s really filled out. He’s always been a beautiful horse. As a matter of fact, I have a two-year-old that just came in and they could be brothers, they look the same. Hopefully, he’ll be as good.”

Cupid was a $900,000 purchase for Coolmore at the 2014 Keeneland September Yearling Sale. Now four, Cupid accomplished wins in the Rebel Stakes, the Indiana Derby and the West Virginia Derby, all Grade 2, last season. He kicked off his four-year-old season in style in the Gold Cup to earn his Grade 1 status. The son of Tapit out of Pretty ‘n Smart has five wins and one second from 10 starts, and has rewarded his connections with $1,636,803 on the track.

“We took the back roads with Cupid last year and made over a million dollars,” Baffert said. “Coolmore has been great and they kept him in training. They asked me if I thought he’d get better and I thought he should. We freshened him up and here we are. I got an important Grade I which is very important for a horse like him.

When asked about winning his sixth Gold Cup, putting him behind Charlie Whittingham, who has accomplished eight, Baffert answered, “I don’t think I could ever compare myself to the great Charlie Whittingham. He was one of the greatest ever. I was stabled next to him his last few years and he never complained, about anything. If he had a good horse, he got every ounce of run out of them. That’s the way I feel. If you have a good horse, you don’t slow ’em down. He made sure they were fit and ready.

I learned a lot from him about bringing them off a layoff. If they’re good enough, they can take it. You saw a little Charlie Whittingham today. When you hang around with Charlie and are his neighbor, you learn a little bit.”