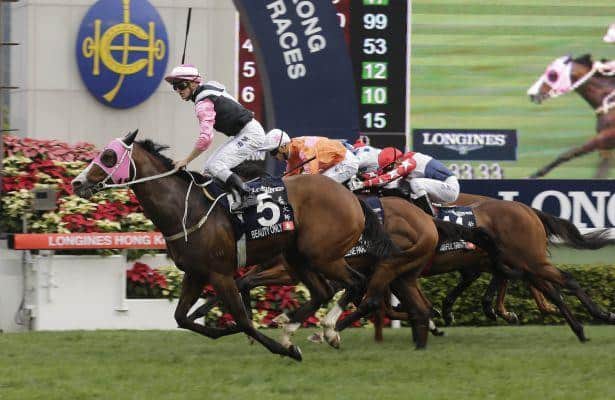 “The track looks firm enough to me,” the trainer said as his face crinkled to a smile. “That’s one of the reasons why we’ve come here. He can only perform on a good or firm track; good ground, he can still do it, but if it’s rain-affected you can forget about him, he’s hopeless on it!”

With the G1 Yasuda Kinen (1600m) one day hence, Beauty Only will surely get his ideal going. Since a sprinkling of rain on Wednesday night, the racecourse has remained dry, the only discernible natural moisture being the fast-evaporating early dew. Today is set to be hot and dry and the same is forecast for race day. Tokyo racecourse’s wide turf circuit will doubtless be riding firm when the declared 18 go to post at around 3.40pm local time.

“He’ll like the big, open track, and he stays 1800 metres so that rising straight, I believe, will suit him,” Cruz added.

All going to plan

The Holy Roman Emperor six-year-old enjoyed a steady canter at around 6.45am, taking his turn, as has become the routine, ahead of fellow Hong Kong raider Contentment. Owner Simon Kwok was on hand to observe alongside Cruz as assistant trainer Cody Mo steered the bay around one lap. Beauty Only appeared strong and relaxed, a few flicks of the tail at the pull-up betraying a hint of freshness.

“Everything has gone according to plan – there have been no hiccups along the way, no setbacks,” Cruz said. “I’m very pleased with the horse, he’s eating well and that’s most important. He’s very relaxed here – he kind of likes Japan.

“The horse got into trouble last time in the Champions Mile, he ran into traffic in the straight, but he should have won that race. He pulled up very well – he’s a strong-bodied horse and he recovers very quickly,” he revealed.

Cruz is hoping for no such troubles in tomorrow’s run. Beauty Only and Zac Purton will break from gate 12 and that suits the trainer just fine as he seeks a second victory, 11 years after Bullish Luck’s triumph in 2006.

“Beauty Only’s never up front – he’s always at the back – so I’m happy enough with 12. I prefer him outside rather than inside anyway,” he said. “He’s never had early speed, so I’ll be hoping he can run midfield and, as usual, he can come late and strong in the finish. I expect him to be competitive with the Japanese horses.”

Contentment was a neck ahead of the fast-finishing Beauty Only in the G1 Champions Mile at Sha Tin a month ago. The six-year-old has drawn gate five and trainer John Size is happy to take that.

“I think it’s a good draw with the horses around him,” he told the gathered press after Contentment had completed his usual two laps of the dirt track at a temperate canter. “I thought he might take a position running about fourth or fifth. There seems to be reasonable speed in the race so for me it looks ideal.”

Size, like Cruz, seemed relaxed and satisfied with his charge this morning.

“As the race approaches he’s beginning to look stronger again so I’m happy with that. I can’t really see anything that I’m concerned about or any faults or flaws,” he said.

Sunday’s field is, as ever, a competitive G1 contest, and while Cruz expressed “I’m glad there’s no Maurice this time,” he and Size both acknowledged the reality that a field featuring the likes of Isla Bonita (gate 15), Red Falx (six), Staphanos (18), Logotype (16), Satono Aladdin (14), Ambitious (4), and the up-and-coming Greater London (seven) is a field that will still take some beating.

“It’s difficult to actually put them all together,” Size said. “They’re coming from different classes and areas but as usual it’s a very strong race. Ever since I’ve been coming here people have been saying, ‘It’s not that strong this year’ but it’s always strong, actually.”

Joao Moreira will partner Contentment in the feature. Hong Kong’s champion jockey has picked up 10 rides on the day.