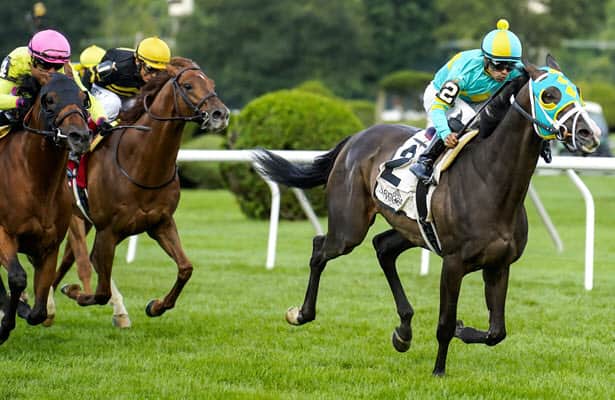 Three Diamond Farm’s New York-bred Cross Border ran down pacesetter Channel Cat in the stretch and repelled Rockemperor’s late bid for a 1 1/4-length victory to repeat as the winner in Saturday’s Grade 2, $250,000 Bowling Green for 4-year-olds and up going 1 3/8 miles on Saratoga Race Course’s inner turf.

Cross Border tracked in third position as Channel Cat and Channel Maker – who like Cross Border were sired by English Channel – with the opening quarter-mile going in 24.75, the half in 49.37, three-quarters in 1:14.52 and a mile in 1:38.71 over a course rated good.

Under jockey Luis Saez, who won the Grade 2 Jim Dandy on Essential Quality in the prior race, Cross Border was angled out slightly from the rail out of the final turn, challenging Channel Cat when straightened for home before overtaking him in the final furlong. Rockemperor made up ground in the final jumps, but Cross Border hit the wire in 2:16.36 to secure his first win since the Lubash in July of last year at the Spa.

Cross Border improved his Saratoga record to six wins and one second from seven starts.

“He loves it here. This is a special horse that I love riding,” Saez said. “He always tries hard. Today, he ran huge. It set up perfect with a good pace. When we came to the top of the stretch, he really gave me that kick and he battled. He always wants to give me everything. It all went according to plan.”

Trained by Mike Maker, Cross Border started his 7-year-old campaign with consecutive third-place finishes in the Grade 1 Pegasus World Cup Turf Invitational in January at Gulfstream Park followed by the Grade 2 Pan American in March at the same track.

Returning to stakes company after running second in an allowance on June 27 at Belmont Park, Cross Border had to defeat a field that included 2019 Bowling Green-winner Channel Cat and 2018 victor Channel Maker [who dead-heated that year] to secure a second straight win in the contest. Cross Border crossed the wire second in 2020 but was elevated to first when Sadler’s Joy was disqualified for causing interference.

“He’s a model of consistency and durability,” Maker said. “Hopefully, we have another couple of years with him. He’s handled everything. Especially here.”

The Grade 1, $750,000 Sword Dancer for 4-year-olds could be Cross Border’s next start. The 1 1/2-mile turf contest for 4-year-olds and up is a Breeders’ Cup “Win and You’re In” qualifier to the $4 million Longines Turf in November at Del Mar.

Rockemperor, trained by Chad Brown, bested Shamrocket by one length for second under jockey Joel Rosario. The Irish bred was making his first stakes appearance since running fifth in the Grade 1 Resorts World Casino Manhattan on Belmont Stakes Day June 5.

“He ran really well,” Rosario said. “On the first turn I got a little out of position, but he ran well. The horse who won ran the best.”

Shamrocket, conditioned by Hall of Famer Todd Pletcher and ridden by Irad Ortiz, Jr., rallied from sixth to edge Channel Cat by a head for third.