Critical Value rallies and proves much the best in Belmont's Bouwerie 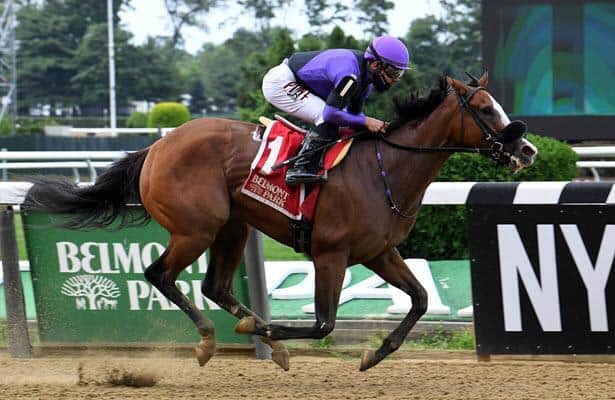 Trained by Jeremiah Englehart, the Bodemeister bay captured the Maid of the Mist going a one-turn mile in October on Big Sandy and kept her perfect Belmont record intact with a 4 1/2-length score in the Bouwerie.

"She ran really well. This filly just brings her lunch pail every time," said Englehart. "She didn't look like one of our stars last summer, but she came to work every day and she's just a really nice filly to be around. She tries hard every time. She likes to run, and I'll take those all day long."

Her stablemate, Risky Mischief, was away awkwardly but was hustled between rivals by Jose Ortiz to mark the opening quarter-mile in 22.60 seconds and the half-mile in 45.70 on the fast main track while under pressure from Courageous Girl and Big Q.

Critical Value, patiently handled by Junior Alvarado from the inside post, saved ground along the rail in fourth and waited until late in the turn to tip out and circle past her rivals en route to a facile score in a final time of 1:23.07.

Big Q, who raced three-wide throughout under Hall of Famer John Velazquez, completed the exacta 1 1/4-lengths in front of Naked Avenger. Risky Mischief and Courageous Girl rounded out the order of finish. Ilchester Cheetah was scratched.

Alvarado said he took a patient approach with the returning Critical Value.

"I got the one-hole, so I had to stay there for as long as I could. I just tried to save a little bit of ground," said Alvarado. "I tried to give her the best chance I could without getting her tired. She hadn't run in a while. By the time we hit the five-sixteenths [pole], I gave her a little reminder because sometimes she needs to get going, but once she got going, that was it. Once she puts up the run, you just have to hang on."

A maiden winner at second asking in August at Saratoga, Critical Value arrived at the Bouwerie off a six-and-a-half month layoff from her prominent fourth in the Grade 2 Demoiselle on December 7 at Aqueduct Racetrack.

"She's a lot better in the paddock. In Saratoga, she was always very nervous, but she was much more professional today," said Englehart. "She's filled out a little bit. She's not a very big filly, but she's a really nice filly."

Bred in the Empire State by Ten Strike Racing's partners Marshall K. Gramm and Clay Sanders, Critical Value banked $55,000 in victory while improving her record to 5-3-1-0. She paid $3.70 for a $2 win ticket.

Live racing resumes Thursday with a nine-race card headlined by the $100,000 Mount Vernon, a one-turn turf mile for New York-bred fillies and mares 4-years-old and up in Race 8 at 5:04 p.m. Eastern. First post is 1:15 p.m.
Critical Value Bouwerie Bouwerie (2020)