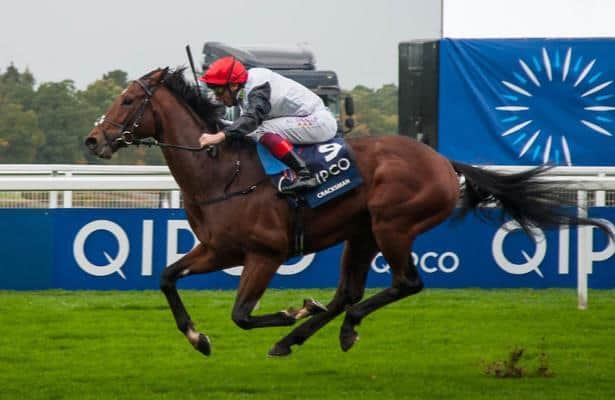 Cracksman topped a successful British Champions Day for trainer John Gosden when he pulled away for a repeat victory in the Group 1 Qipco Champion Stakes Saturday at Ascot, ending his race career in winning style.

With no one close enough to catch him, jockey Frankie Dettori celebrated before even hitting the wire six lengths in front.

Cracksman, who wore blinkers for the first time, also won the Prix Ganay (G1) and Coronation Cup (G1) this season before running second to Poet's Word in the Prince of Wales's Stakes (G1). The 4-year-old Frabkel colt had been away since his runner-up effort during the Royal Ascot meeting in June due to turf being too firm in other races.

"I'm a great believer in putting a little semi-blinker on and have had a lot of luck with it down the years, having picked up the trick in America and most horses race in blinkers there," Gosden told Racing UK, saying Cracksman had not been the same since his Ganay victory and was distracted by fillies and mares in the stable during the Royal Ascot meeting.

"I can tell you the great Secretariat and Northern Dancer raced in blinkers," he added. "I don't have a prejudice against them. Sometimes you need to focus their minds."

Crystal Ocean, Subway Dancer and Capri were next to cross the finish line in the Champion Stakes. The final time for the race, run at about 1 1/4 miles over soft turf, was 2:08.79.

One race earlier, Gosden won the Queen Elizabeth II Stakes (G1) with Roaring Lion, who is under consideration for a run at Breeders' Cup 2018. Gosden also won the first race on the card, the Qipco British Champions Long Distance Cup (G2), with Stradivarius.

It was the fifth straight Cup win for Stradivarius, who remains unbeaten this season. He also won the Yorkshire Cup (G2), the Ascot Gold Cup (G1), his second Goodwood Cup (G1) and the Lonsdale Cup (G2).

The six-furlongs Sprint Stakes was won by Sands of Mali, who went gate-to-wire to upset the field over Harry Angel. After refusing to load, Harry Angel went into the gate last with the help of a blindfold.

The Fillies & Mares Stakes, run at 1 1/2 miles, had a competitive quartet cross the finish line close together. Magical came out on top over Coronet, Lah Ti Dar and Kitesurf.