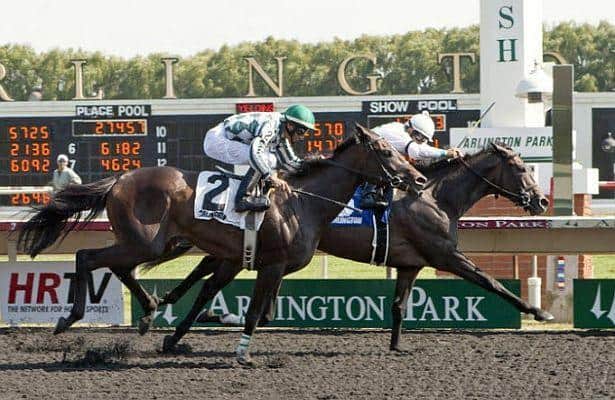 Defending champion Cozze Up Lady and multiple stakes winner My Option lead the nominations for the 26th running of the Grade III $150,000 Chicago Handicap on Saturday, June 28. Owned by the partnership of Martin Racing, Morgan Thoroughbreds, Westwind Property and Farfellow Farms, Cozze Up Lady won last year’s edition with an impressive turn of foot, splitting horses while four-wide and winning by three-quarters of a length for conditioner Bret Calhoun.

Since that win, the daughter of Cozzene has raced in three stakes, including a win in the $60,000 Mardi Gras Stakes at the Fair Grounds and a sixth in the Grade I Madison Stakes at Keeneland.  Last out, after a brief freshening, the 5-year-old mare was fourth in the Grade III Winning Colors Stakes at Churchill Downs.  A return to the Polytrack course could be a welcome change, as she has proven victorious in three of her six synthetic course attempts.

Tim Keeley’s multiple Illinois-bred champion filly My Option has been aimed toward the Chicago Handicap since the commencement of her season in April.  The Chris Block trainee has raced twice in 2014, finishing third - beaten a half-length - in the restricted Third Chance Handicap at Hawthorne Race Course and suffering a wide trip en route to a sixth-place finish - beaten 2¼ lengths - in the Grade III Hendrie Stakes at Woodbine last out.  Never off the board in five career Arlington attempts, including a victory in the Grade III Arlington Oaks last year, the 4-year-old gray filly looks to return to the form which saw her run an impressive photo-finish third in last year’s Grade II Raven Run Stakes at Keeneland.

Nosing out My Option that day for second was fellow Chicago Handicap nominee and intended runner Eden Prairie.  Trained locally by Neil Pessin for the Lothenbach Stable, the dark bay 4-year-old filly is exiting a fifth in the Grade I Madison Stakes at Keeneland and has finished in the exacta in five of her last six races.  An impeccably quick daughter of Mizzen Mast, Eden Prairie has proven maneuverable and versatile over her career, including victories on synthetic and grass courses.  Pessin believes the trip of the Chicago Handicap - seven furlongs over a synthetic course - is her optimum.

Adding intrigue to the nominees is Gary and Suzanne Biszantz’s Pirate’s Trove, who acquired the admiration of many racetrack onlookers with a 12 ¼-length maiden victory on May 31 at 6½ furlongs.  Trained by Mike Stidham, the daughter of Speightstown is a half-sister to Authenicat, who was third in the Chicago Handicap in 2009 to champion Informed Decision amid a multiple stakes-winning career.  Pirate’s Trove worked solid half-mile in :48.60 on Saturday morning and a Chicago Handicap participation decision is to be made shortly.