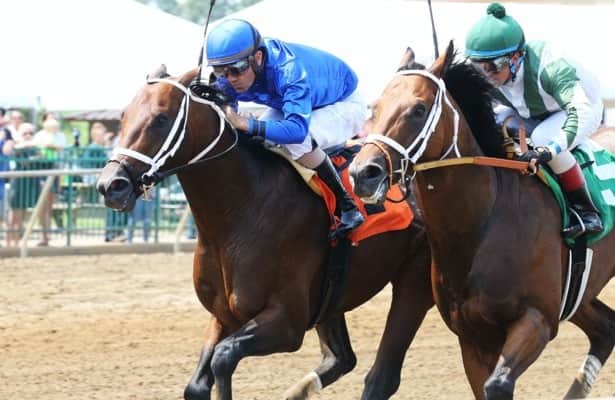 Meet-leading trainer Brad Cox has a barn well-stocked with 3-year-old stakes winners, and Colonel Bowman will try to become the latest in Sunday’s $200,000 Ellis Park Derby.

“He’s trained very well up to the race,” said Jorje Abrego, who oversees Cox’s Ellis Park operation. “It was his first time going two turns last time; he handled it very well. After the race he came back good, breezed a couple of times really good. I’m very excited because it’s a mile and an eighth. I think he’ll run well. I like the horse. I’m not really scared of the competition. I think he has a big shot to win the race.”

Abrego, who was around Colonel Bowman all spring at Churchill Downs, says he’s noticed a change.

“He gallops a mile and a half every day,” he said. “Second round, he gets stronger and stronger. I think the two turns for him is very good.”

Cox entered three horses in the $125,000 Groupie Doll for fillies and mares: stakes-winning and graded stakes-place Dreamalildreamofu, sprint specialist Lady Rocket and Indiana Grand stakes-winner Matera, who needs a scratch to run. When it was suggested that he was going to be busy in the paddock saddling horses, Abrego quipped, “I hope it keeps me busy in the winner’s circle!”

Randy Morse won a pair of 2-year-old maiden races at Ellis Park on July 11 with Randy Patterson's filly Verylittlecents prevailing by 2 1/4 lengths at five-eighths of a mile and Donna Clark's colt Texas Red Hot wresting victory by a head at seven-eighths of a mile. Both youngsters were making their second start.

Morse is very high on Texas Red Hot, even if the Texas Red colt doesn’t seem to get that much respect elsewhere.

“He’s a really nice-moving colt,” he said. “I’m really high on him. He ran a really slow (speed figure) number the other day. But we’ll see. I think he’s pretty special. In his last race, it had rained that day. I think they’d opened (harrowed the track) up, and it still wasn’t very fast, let’s put it that way. It was really muddy out of the chute, and that race was seven-eighths.

“But bottom line is, he did it very professional, I thought. He was boxed in behind horses, nowhere to go. And when he did get a seam, he did what he needed to do.”

Texas Red Hot, who’d been second in his debut, made a leap forward between races. Morse expects another progression for this race, saying, “I think the farther they keep going he’ll just get better and better.”

“She got away really bad,” he said. She had the one hole. But she’s really quick. But she showed she had some class, because she kept finishing that day, where most of them when get away bad will just throw in the towel.”

Morse said she put it together in her last start. “A horse came up and hooked her, and when he asked her, she ran away from the field,” he said.

“The filly looks pretty good on paper,” Morse continued, speaking of the Debutante. “The colt, he’s going to have to step up numbers-wise. But I think he’s capable.

“Both of them, knock on wood, have done very well. Both of them had a really good breeze here, worked in a minute by themselves, just real easy. As hot as it’s been, I haven’t wanted to overdo anything with them. They’re still just babies, still learning.”

No matter what happens Sunday, Morse believes both babies have a bright future.

“This doesn’t mean their whole future, this one race,” he said. “…. (but) you’d like to see them finish. This is seven-eighths of a mile. This will separate a lot of them of them. They’re doing well. It’s just a matter if they’re good enough.”

Anderson Stables’ Lady Kate, the 2020 Group Doll winner, is the only return winner from last year’s five dirt stakes on the Ellis Park Derby Day card. Then again, she’s the only who could, with the other four stakes limited to either 2-year-olds or 3-year-olds.

Lady Kate also is seeking to become the first two-time winner of the stakes, which dates to 1987. Even Groupie Doll, the two-time Breeders' Cup Filly & Mare Sprint and champion female sprinter, only won the stakes now named for her once, that coming in 2011 as a 3-year-old. Groupie Doll also was third in 2013 en route to her second championship.

"She’s doing well,” trainer Eddie Kenneally said of Lady Kate, who recently shipped over from his Keeneland barn. “She seems to like it here, and she was successful in the race last year and got it done first time running on this track. She’s been here a few days and settled in nicely. She’s been doing her breezes at Keeneland. It’s a loaded race, quite a few runners in there. But I think it was a good big field here last year as well.”

After the Groupie Doll, Lady Kate finished second to champion Monomoy Girl in Churchill Downs’ delayed La Troienne (G1). She tired to 10th after pushing the pace in the Breeders’ Cup Distaff, then in her only start this year was fifth in Aqueduct’s Distaff Handicap (G3) in April.

“She seems to like Ellis and Churchill,” Kenneally said. “So hopefully we can repeat something like we did last year with her. But she’s in great shape. She didn’t have a prep for the race this year. She hasn’t run since the first week of April. So she’s coming in fresh with no prep. That’s the only concern: She doesn’t have a race under her belt coming in against horses that are fit and racing.”

That Grade 1 placing was huge for Lady Kate, a daughter of champion Bernardini who cost $485,000 as a yearling.

“For a filly with a pedigree like her it enhances her value tremendously to be placed at all in a G1,” Kenneally said. “It stamps her value going forward. So it means a lot for those kinds of fillies. She was a high-dollar yearling and thankfully it’s turned out.”

Colby Hernandez already has blown past his win total of three at Ellis Park last summer, his first riding at the Pea Patch. With seven victories heading into Saturday’s racing, the younger brother of Ellis Park-meet leading rider Brian Hernandez is making significant headway as a mainstay on the circuit in his second year riding in Kentucky after 14 years in his native Louisiana.

The younger Hernandez has two shots in Sunday’s five stakes to make a productive meet even better. He is the regular rider of 3-for-3 Carribean Caper, the tepid 9-5 favorite in the $100,000 Audubon Oaks over 2-1 Magic Quest. Both 3-year-old fillies come into the seven-furlong race off impressive allowance victories over the track. Brian Hernandez rides Magic Quest.

Hernandez also rides New Roo, who is 10-1 in the $125,000 Groupie Doll for fillies and mares at a mile. Hernandez rode New Roo for the first time last year at Ellis Park when she won an allowance race by 12 lengths, followed by a runner-up finish in the Groupie Doll won by Lady Kate, who also is back in the stakes.

Carribean Caper, trained by Al Stall, has won her three starts by a combined 17 lengths.

“She does it impressive every time,” Hernandez said. “I think every race she gets better and better. Hopefully everything works out Sunday and we get a good trip and get the money.”

Though she made it look easy with a 4 1/2-length victory over older fillies and mares last time, Carribean Caper didn’t have the smoothest of trips until she drew off.

“She had an awkward break, and the outside horses kind of wiped us about a little bit,” Hernandez said. “I had to check her. But after that I was able to get her in stride. Middle of the turn, all I did was lean forward on her and she gave me whatever she had. It was push button from there.

“I think she’s a really, really nice horse. I don’t think we’ve opened her up yet all the way. Hopefully she turns into a great mare.”

New Roo faces a capacity field of 12 in the Groupie Doll. Trainer Tommy Drury, seeking a confidence-builder in her 5-year-old debut after ending 2020 with a couple of disappointing efforts, dropped New Roo in for the $62,500 claiming option in an allowance race at Churchill Downs. She won and wasn’t claimed.

“She ran a good race that day,” Hernandez said. “I think at the end she got a little tired because she’d been off. But I think we’re in a good spot here. She ran second in the same race last year. Hopefully we can get the money this time. I think she likes this track big-time.

“I feel great about both horses.”