Cox wonders what might have been after Belmont Stakes win 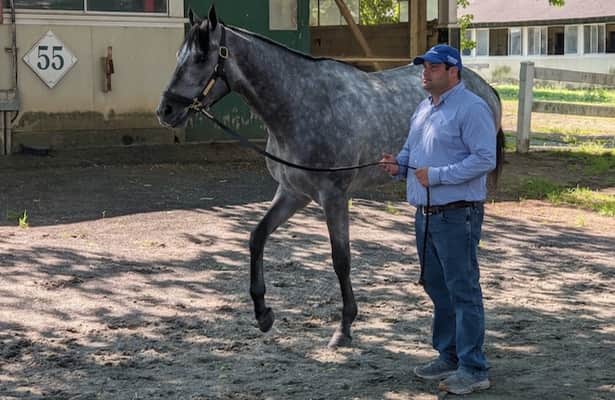 Brad Cox admitted it. When he drove to the barn Sunday morning to check on Belmont Stakes winner Essential Quality and his other horses, he had that “what if” moment.

“I thought to myself, this horse might have been a Triple Crown winner,” he told reporters at Belmont Park about 15 hours after the victory.

[RELATED – What we learned: Hot Rod Charlie the 'star' of the Belmont Stakes]

Think about the chain of events that led to this year’s classics being diverted through the cauldron of what might yet be their biggest scandal ever.

It started innocently enough. When Essential Quality was drawn just inside Rock Your World for the Kentucky Derby, he was put next to a horse who habitually goes left when he comes out of the gate. After they sideswiped each other at the start, it set into motion a momentous turn of events.

• The early contact forced Essential Quality to go wide, and he did not make up any meaningful ground on his way to a fourth-place finish at Churchill Downs.

• Rock Your World got the worst of the contact and could not join early pacesetter Medina Spirit, who ran off to a loose lead in a gate-to-wire Derby triumph.

• Because he surprisingly won America’s biggest race rather than finish up the track, Medina Spirit’s positive drug test afterward went from a garden-variety gotcha to a really big deal. Who knows? Trainer Bob Baffert might not have been facing the wave of suspensions that continues to build as regulators peel away layers of red tape – and as Baffert’s legal team aggressively defends him.

• Because they did not win America’s biggest race, Essential Quality and his stablemate, Derby runner-up Mandaloun, were not entered in the Preakness, where one of them might have been too much for eventual winner Rombauer. With a Triple Crown on the line, one of them might have attracted more than marginal attention from the mainstream public.

And to think it all began with that draw of the 14 and the 15 the Tuesday before the Derby.

Cox stands to add that elusive Kentucky Derby trophy once his home state’s racing commission gets around to disqualifying Medina Spirit and promoting Mandaloun. And Essential Quality will be promoted to third, meaning he will have finished in the money in all his races.

So just think about all that might have been. Cox did exactly that during that pre-dawn drive Sunday on Long Island.

“It is what it is,” he said. “I’m very happy with how those horses ran in the Kentucky Derby. It just wasn’t meant to be with regard to where they finished. We live with the result, we march forward, and we get the result we got yesterday.”

That was Essential Quality’s grinding duel down the stretch with Hot Rod Charlie. Both horses were said to have come out of the race in good order, although in Essential Quality’s case, it seemed like he needed a little more time lying down after his usual wake-up exercise Sunday around 5 a.m. EDT. Cox finally did lead him out of the barn to pose for photographers just before 10 a.m.

“He’s a really intelligent horse,” Cox said. “We even train him on race day, and as soon as we train him, we’ll put him back in (the barn), and he’ll lay down for most of the day on race day. He knows what’s going on. He obviously deserves a good rest today after that demanding race.”

It could be said that horse racing deserves a rest, too, after these tumultuous last five weeks. But it really is not over yet.

On either side of his next start next Sunday in the Pegasus Stakes at Monmouth Park, Mandaloun is poised to be declared by the Kentucky Horse Racing Commission as the winner of the Kentucky Derby. And Cox suddenly will have gone from zero to two classic victories.

“I don’t think about it that much,” Cox said. “No one would want to win a race that way, but we’ll just accept the result.”

Sooner or later, though, Cox will be reminded that he will have retroactively become the first Louisville native to have trained a Derby winner.

“I guess it may take a little pressure off in regard to how you want to win the race,” he said. “I guess we’ll be in the history books as winning the race. It’s a major accomplishment, but I’d definitely like to go through the thrill of the victory. That would be awfully nice on the first Saturday in May. To be able to stand in that winner’s circle would be pretty special.”

Like it or not, Cox will forever be part of a storyline that will be smeared in controversy. As the beneficiary-in-waiting, he hopes racing learns a lesson from this spring.

“I think there’ll be some good that comes out of the issue with the Derby,” he said. “I’m hopeful there will be more pre-race testing as opposed to post-race testing. It’s obviously a prestigious race. With a race of that magnitude, maybe there’s some things we could do moving forward in regard to Triple Crown races. It would be nice when we leave the paddock, we know exactly what’s going on.”

In the meantime, Cox hopes racing gets back to emphasizing positives such as the brewing rivalry between Essential Quality and Hot Rod Charlie, one that could be renewed during the Saratoga summer in the Travers (G1).

“We just want to try and keep everything as positive as we can,” he said. “There’s always going to be some setbacks, and we have to adjust and keep moving forward.”