Cox is suspended 10 days for bute overage in Stephen Foster 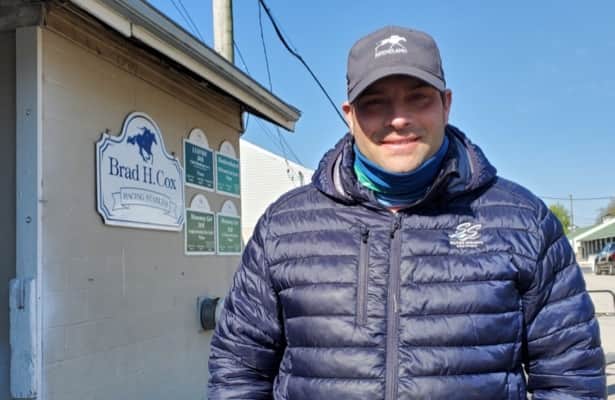 According to the ruling, which is dated May 15 and can be accessed on the Kentucky Horse Racing Commission web site, phenylbutazone was found in Warrior's Charge at a level of 2.51 micrograms per milliliter of blood. Warrior's Charge finished second in the Stephen Foster at 7-1.

Phenylbutazone, or "bute," is a regulated non-steroidal anti-inflammatory that is commonly administered. It is permitted on race day in Kentucky, but not at levels beyond 0.3 micrograms per milliliter. It is a Class C positive, which ranks among the least severe infractions.

Cox will serve his suspension from May 23 to June 1. The ruling also noted Cox waived his right to a formal hearing before the board of stewards.

"We were completely shocked with these lab results due to the fact this medication was administered within the strict guidelines that are set in place," Cox said in a statement provided to Horse Racing Nation. "Having said that, while we disagree with the results, I have to own it and accept responsibility. Moving forward, I am committed to industry leading protocols which hopefully prevent this from happening again."

Warrior's Charge  was disqualified from the Stephen Foster and his purse earnings ($115,200) redistributed. He is owned by Marshall Gramm's Ten Strike Racing and Sol Kumin's Madaket Stables. Both owners also waived their right to a formal hearing.

Warrior's Charge is a 6-year-old full horse by Munnings. He spent this past winter at Oaklawn Park where he made three starts that included an allowance win and off-the-board finish in the Essex Handicap (G3) most recently on March 19. Warrior's Charge does not have any recent works listed on his Equibase page.