Cox says Essential Quality was best in Derby; Preakness next? 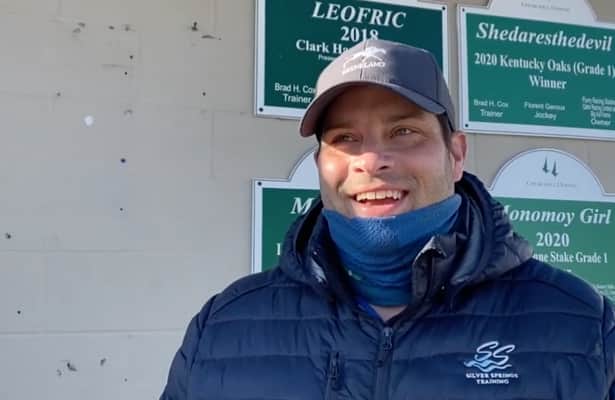 A few minutes and about 200 yards away, one of his rivals made a bold declaration about beaten favorite Essential Quality.

“Not to take anything away from the top three horses,” trainer Brad Cox said, “but he was the best horse yesterday.”

[RELATED – What we learned: Medina Spirit excels on lead in Derby victory]

Cox’s case was bolstered by a chart from Trakus Racing, which showed Luis Sáez’s bumpy start and wide trip forced Essential Quality to race 68 feet farther than John Velázquez on Medina Spirit to finish only a length behind in fourth.

“Listen, some people may not agree with that,” Cox said. “He ran a huge race. I was very proud of his effort. When you give up 68 feet, you do that math.”

Since a length is generally considered to be eight to nine feet, Essential Quality might have conceded seven to eight lengths of ground.

“That’s a good bit to me,” Cox said. “It looked like two jumps past the wire he was third to me. But the bottom line is he was fourth best at a mile-and-a-quarter yesterday. It’s just he lost a lot of ground around both turns.”

Cox might send both Essential Quality and Derby runner-up Mandaloun back for a rematch against Medina Spirit in 13 days in the Preakness. And Baffert might also be represented by Concert Tour, who breezed five furlongs Sunday morning in 1:00.6 at Churchill Downs.

“He worked well this morning,” Baffert said. “We’ll sit down and talk to (co-owner Gary) West. He wants to have his horses develop and not get in a rush to do things. We know he’s a really good horse. We’ll see how he is next week. I really can’t make a call right now.”

Baffert usually waits until the weekend before a race to declare his starters. But he all but confirmed Preakness plans for Medina Spirit, who led at every call Saturday.

“He’s got a great mind on him,” Baffert said. “He showed us another gear that we didn’t know he had yesterday. Coming in here, I thought everything had to go perfect for him. We made the lead pretty easily for him. The other speed horse (Rock Your World) didn’t break. That’s the thing about the Derby. You’ve got to get the trip.”

Both Baffert and Cox reported their horses came back well from Saturday’s race. So did Todd Pletcher about his four starters, the best of whom was Known Agenda in ninth.

“We unfortunately had a group of horses that want to come from well off the pace,” Pletcher said. “Probably the defection of (would-be pacesetter) Caddo River dramatically changed the complexion of the race.”

While Baffert would not bite on the “what if Caddo River had run” hypothetical, Cox did. After all, he trains the horse.

“It crossed my mind last night,” he said. “They might have switched it up up front. But I can’t take anything away from the winner. He did all the dirty work and kept rolling. He ran a big race. He ran huge.”

Scratched from the Derby because of a fever last week, Caddo River is scheduled to breeze Monday at Churchill Downs.

“We’ll get a little bit of a line tomorrow morning after he works to see if (the Preakness) is something we’re going to do or not.”

Cox also stopped short of confirming Essential Quality and Mandaloun would be in the Preakness.

“No commitments,” he said. “I love the Preakness. It’s probably one of the great weekends of the year. We’ll definitely have horses throughout the undercard, but we don’t know if we’ll take some horses to the Preakness.”

While the Cox horses are maybes, the Pletcher barn is doubtful to be at Pimlico’s biggest race. He did say that if Lexington Stakes (G3) runner-up Unbridled Honor does not race Saturday at Belmont Park in the Peter Pan (G3), then the Preakness might be a target.

Steve Asmussen said Midnight Bourbon was fit after his sixth-place finish and was a possibility to start in the Preakness – hopefully better than he did in the Derby.

“His hind end slipped out, and that’s that,” Asmussen said. “It wasn’t where we were hoping to be. He ran reasonable after a poor beginning, covered plenty of ground and didn’t look like he was horribly overmatched – or overmatched at all.”

If Baffert sends Medina Spirit and Concert Tour to Baltimore, he will be armed with two horses that have similar forward-running styles.

“Their styles could be similar,” he said. “We just want to look at them and see how they train. They have to be doing really well.”

It is hard to imagine Medina Spirit doing any better than he did Saturday. His performance erased questions about his having second-itis in the San Felipe Stakes (G2) and Santa Anita Derby (G1). Yet there is the perception he is no better than third best among the 3-year-olds in the Baffert barn behind Concert Tour and the injured Life Is Good.

“I think it’s not fair,” Baffert said. “There’s no first, second or third. He’s a top horse in my barn. Life Is Good, we saw what he could do (3-for-3 with two graded-stakes wins). When he got hurt it was just a big blow to us, because this was a superior-type horse. With Concert Tour I’m still scratching my head about (finishing third in the) Arkansas Derby (G1).”

All the more reason Baffert might want to race him May 15 at Pimlico, where he shares the record with seven Preakness victories. He is 6-for-6 taking Derby winners there in the spring. That does not necessarily make him confident that Medina Spirit will be the seventh.

True enough. Silver Charm (1997), Real Quiet (1998) and Authentic (2020) had established that pattern. The first two went on to win the Preakness. Will history repeat itself with Medina Spirit?