Cox on his Derby contenders: Who's fastest, who's laid back 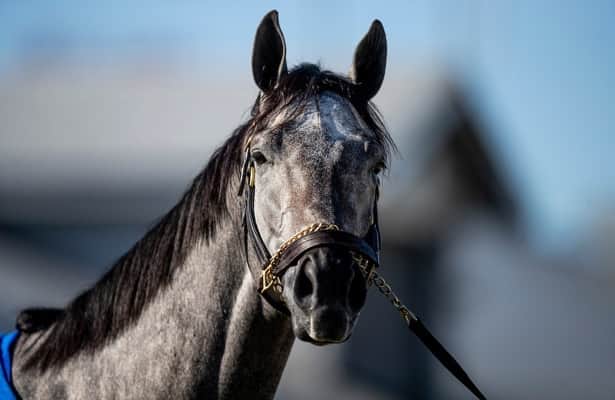 It has been only a matter of time until Brad Cox had a starter in the Kentucky Derby. Now he finds himself with at least three candidates for the 2021 edition in his hometown.

Cox told HRN Tuesday how he is mapping out the next step for each of the three — Essential Quality, Mandaloun and Caddo River. And he provided insight into how they train and where they are in the process.

[RELATED: The 5 best performances on the Derby trail last week]

Essential Quality clearly is the leader of the pack. The 2-year-old champion is undefeated in four starts, winning the delayed and sloppy Grade 3 Southwest by 4 1/2 lengths. Cox said he expects to make a decision "in the very near future" on whether the Goldolphin homebred's next stop will be the Blue Grass Stakes (G2) on April 3 at Keeneland or the Arkansas Derby (G1) on April 10 at Oaklawn.

"I'll just kind of do a little more research," Cox said. "One race is four weeks out, one race is three weeks out. Just kind of see who's running where, kind of come up with a game plan."

The only blemish on Mandaloun's record is a third-place finish in the Lecomte (G3), from which he rebounded by winning the Risen Star (G2). Next up for the Juddmonte Farms homebred is the Louisiana Derby (G2) on March 20 at Fair Grounds.

"He's doing great. He's had one work since the Risen Star, a nice, easy half mile" in 50 flat at Fair Grounds on Saturday. "We'll do a little more this coming weekend."

Caddo River got off to a slower start, finishing second in his first two races before breaking his maiden and then scoring in the Smarty Jones on Jan. 22. Bred and owned by Shortleaf Stable, he'll start next in the Rebel Stakes (G2) on March 13.

Cox said Caddo River is a bit different from Essential Quality and Mandaloun in a few ways.

"He's probably the fastest of the three, just based off how they breeze," Cox said. "I mean, he's very rapid."

But also, he said, "Caddo River is definitely the most laid back of the three."

Essential Quality and Mandaloun are "probably a little more steady. Horses that can, you know, definitely appear like they can get the mile and a quarter. (Mandaloun) has already got a mile and an eighth. And the other one (Essential Quality) is a multiple grade one winner at a mile and a 16th. So those two definitely give us enough confidence to think that they're mile-and-a-quarter horses."

Cox said that "Essential Quality is the one that is probably more playful, maybe much more aggressive at times."

Essential Quality might be more aggressive and definitely has the gaudier record, but consider this assessment of Mandaloun:

"He has a little maturing to do, mentally. Physically, he's there. He's a specimen of a horse. Just mentally, he probably needs to move forward a bit. And I think he has this year already, I think he moved forward a good bit in the Lecomte and the Risen Star. I think he's got some moving forward to do mentally, and I think it's going to happen. He's a very, very good horse."