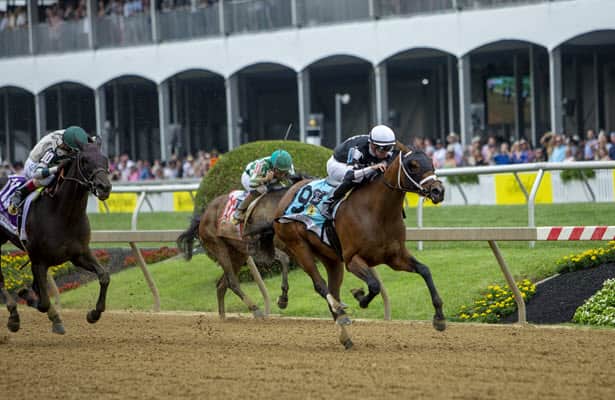 As the two-time reigning Eclipse Award champion trainer, Brad Cox wins a lot of races at a lot of places. That includes Indiana Derby day at Horseshoe Indianapolis, where the Louisville product keeps a sizable division much of the year.

Cox has won at least one of the six open stakes that headline Indiana’s most important race card each of the last five years. That includes two stakes apiece in 2019 through 2021 and three in 2018 after starting his streak with a sole victory in 2017.

The 43-year-old trainer hopes to keep his Indiana Derby Day mojo going Saturday with 2-for-2 Best Actor in the $300,000, Grade 3 Indiana Derby and the duo of favored Interstatedaydream and Patna in the $200,000, Indiana Oaks (G3).

Cox swept both graded stakes in 2020, with Shared Sense taking the Indiana Derby and Shedaresthedevil the Indiana Oaks. In that surreal racing season amid COVID, Shedaresthedevil captured the delayed Kentucky Oaks in her next start, defeating champions Swiss Skydiver and Gamine in the process.

“It would be nice to sweep them again,” Cox said recently at Churchill Downs, adding with a laugh, “that’s the goal. But we feel we’ve got a good shot in both races. It’s been a big day where we normally can be effective. We’re not maybe as spread about as we normally are, trying to have a runner in every stakes. But we’re going to be active in the graded stakes.”

Seven of those 10 winners during Cox’s Indiana Derby day surge have been ridden by Florent Geroux, including the sweep with Shared Sense and Shedaresthedevil.

“It’s very simple,” said Geroux, who will ride Gary and Best Actor and Interstatedaydream for Cox. “Those horses are extremely well-spotted. Most of the time they are the heavy favorite or one of the top choices. It makes my job a lot easier.”

Best Actor captured his debut at Oaklawn Park at 1 1/16 miles then took an off-the-turf, one-turn mile allowance race at Churchill. He’s the 4-1 third choice in the field of 10 behind 5-2 favorite Rattle N Roll (who won last Saturday’s off-the-turf American Derby at Churchill) and 7-2 Actuator, a “buzz” horse since romping in a very fast-run maiden race.

“It is back a little quick, back in four weeks off a big run,” Cox said of Best Actor’s four-length victory on June 12. “ But he did bounce out of it in good order and had two works since. He looked great this morning.

“… He took a little while to come around, but he really showed us a lot in his first run at Oaklawn going long first time, showed the ability to stay on. Brought him here to Churchill. It took us a little while to find the right race for him, the off-the-turf race he performed really well going a one-turn mile. He was up close to a very hot pace, finished up well. I truly believe he’s a two-turn horse, based on pedigree, physically and how he trains. So back around two turns I think will only be a benefit. We’re hoping the best is yet to come. I feel like it is. This will be a great opportunity for him to step in deeper water and hopefully perform well.”

Geroux wasn’t aboard for Best Actor’s races, but he has worked him in the morning.

“He always seemed to be a nice horse,” he said. “Rattle N Roll will be the favorite, he ran last week – beat me in the American Derby (with Geroux second on Kuchar). He won a nice race, and they say he’s come back well. But he’s coming back in one week, so that’s a question mark.

"I also like the horse of Michael McCarthy’s (Actuator). He won very easily last time, very impressive. It’s only his second race this year. Same as my horse, there’s a lack of experience.”

Interstatedaydream is the 9-5 favorite in the Indiana Oaks field of eight 3-year-old fillies. The daughter of Classic Empire has won three of five starts, most recently Pimlico’s Black Eyed Susan (G2), with her defeats a second in Saratoga’s Adirondack (G2) last year behind the multiple stakes-winner Wicked Halo and a third in Keeneland’s Ashland (G1) Stakes won by Kentucky Oaks and Belmont Stakes runner-up Nest.

“She’s a nice filly, obviously,” Cox said. “She showed a lot off the layoff this winter, ran a good race in the Ashland. I thought we did the right thing in not pressing forward to the Kentucky Oaks and letting her come around. It was six weeks to the Black-Eyed Susan, which I think came up a really, really good race. She was up close, did a lot of the running, stayed on well, came out of it in good order.

“We thought this would be a race where we wouldn’t have to ship her a long way, and hopefully add another graded stakes to her resume. She’s a good filly, and hopefully this is the next step toward bigger and better things down the road.”

“I kind of thought she might be a two-turn horse,” Cox said. “This is a great opportunity to give her a chance. I’m very happy with the way she’s been training. She’s a Juddmonte filly; they all have pedigrees. So obviously a placing would be huge for her and her family.”