Cox brings full barn to Fair Grounds, including 4 BC winners 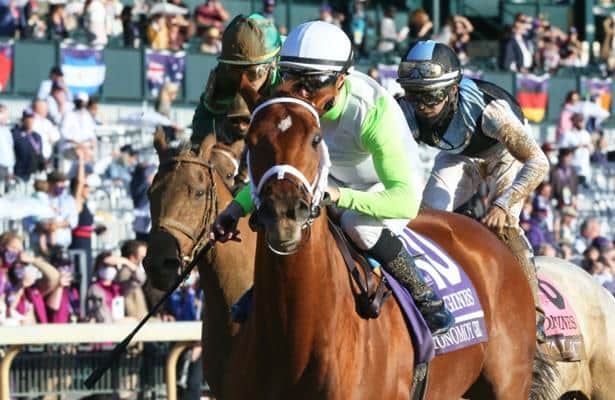 Fresh off a record-tying four wins at the Breeders’ Cup at Keeneland earlier this month, trainer Brad Cox will look to parlay that success to his fourth straight Fair Grounds trainer’s title when the 149th meet kicks off Thanksgiving Day.

Cox, who won 40 races last year and also led with 12 stakes wins, will have the maximum number of 44 allotted stalls, two of which will eventually be occupied by soon-to-be champions Essential Quality and Monomoy Girl, who, along with Knicks Go and Aunt Pearl (IRE), helped him tie Hall of Famer Richard Mandella for the most wins at one Breeders’ Cup. And while he’s the clear favorite to extend his local streak, it won’t be at the top of his to-do list to start the meet.

“Honestly, I never go into a meet thinking about winning the trainer’s title,” Cox said. “The goal is always to be competitive, and especially now to develop our younger horses, that’s a huge part of it. If we get halfway through the meet and we’re in contention, then that’s great.”

At the top of the list of younger horses is Godolphin’s homebred Essential Quality, who won the Breeders’ Cup Juvenile to cap a 3-for-3 campaign that will almost assuredly earn him an Eclipse Award for Champion 2-Year-Old Male.

The son of Tapit is on the short list of Kentucky Derby contenders and could be a candidate for the March 20 Louisiana Derby (G2), a race Cox won last year with Wells Bayou. Essential Quality has been given some time off after his Juvenile win and could resurface in mid-February, which means the local February 13 Risen Star (G2) could be in play.

“Right now, he’s at Churchill jogging and will be there through November,” Cox said. “We’ll eventually get him down to Fair Grounds and start mapping out a path to the Derby, with likely two preps. I don’t have a spot picked out yet but Fair Grounds and their series is definitely in play.

Michael Dubb, Monomoy Stables, The Elkstone Group, and Bethlehem Stables’ Monomoy Girl won her second Breeders’ Cup Distaff prior to being sold for $9.5 million to Spendthrift Farm at the Fasig-Tipton Kentucky Fall Selected Mixed Sale but, in a somewhat surprise decision, will race in 2021.

The 5-year-old daughter of Tapizar is 13-for-15 lifetime in a surefire Hall of Fame career, won the Eclipse Award as Champion 3-Year-old Filly in 2018 and is odds-on to win Champion Older Mare this year.  Monomoy Girl, who won the local Rachel Alexandra (G2) in 2018, is another who will join Cox’s stable during the meet, though a potential schedule has yet to be determined.

“It’s great to have her back (for another season),” Cox said. “Obviously, the Breeders’ Cup at Del Mar is the main goal, but right now we really haven’t talked 2021 with her. We’ll get together with Spendthrift to work out a schedule, let her tell us when she’s ready, and we’ll go from there.”

Korea Racing Authority’s Knicks Go will be the third of the Cox-trainer Breeders’ Cup winners to be stabled at Fair Grounds this meet, though he could be pointed to the Pegasus World Cup in January at Gulfstream Park. Cox, with an ever-growing stable, will also have horses at Palm Meadows in South Florida this year, as part of his Gulfstream contingent, though he will spend the majority of his time in New Orleans.

Cox will kick off his title defense with runners in the last five races on the Opening Day card, including ERJ Racing, Madaket Stables, and Dave Kenney’s Landeskog, who is 4-1 on the morning line for the featured $125,000 Thanksgiving Classic.