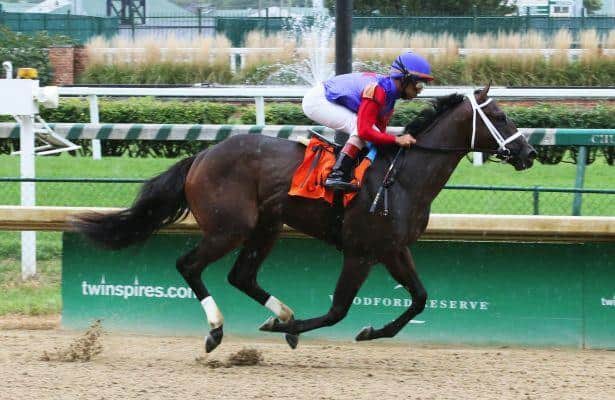 Anne and Ronnie Sheffer’s impressive five-length maiden winner Take Charge Angel hopes to advance to the next step in her career by tackling stakes company in Sunday’s sixth running of the $100,000 Rags to Riches Overnight Stakes at Churchill Downs.

Run at one mile on the main track for 2-year-old fillies, the Rags to Riches annually serves as a prep race for the 1 1/16-mile Golden Rod (Grade 2) on the closing weekend of the Fall Meet at Churchill Downs. The Rags to Riches is carded as Race 8 Sunday with a post time of 4:36 p.m. (all times Eastern). First post is 1 p.m.

Take Charge Angel, a 2-year-old daughter of Will Take Charge, rallied from a half-length off the early pace in her debut win on Sept. 22 at Churchill Downs to defeat eight rivals by a widening five lengths.

“She’s doing really well,” trainer Brad Cox said. “I thought her debut win was pretty spectacular and I think she will move forward down the road as the distances get longer.”

Cox hopes Take Charge Angel can follow in the same footsteps as his stable star Monomoy Girl did last year. The multiple Grade 1 winner cruised to a 6 ½-length victory in the Rags to Riches and eventually won the Longines Kentucky Oaks and is currently one of the top contenders for the Longines Breeders’ Cup Distaff (G1) on Nov. 3.

Take Charge Angel is out of Sheffer’s two-time winning mare Georgie’s Angel, who won her debut at Churchill Downs by 6 ¼ lengths prior to tackling Saratoga’s Schuylerville (G3) by 1 ½ lengths in 2011.

Mother Mother, a 2-year-old daughter by Pioneerof the Nile by the Lion Hearted mare Mother, drew clear to a 6 ½-length win in her debut on July 22 and Del Mar prior to her runner-up finish behind Bellafina, who is one of the top contenders for the Tito’s Handmade Vodka Breeders’ Cup Juvenile Fillies (G1) on Nov. 2.

Jockey Florent Geroux has the call on Mother Mother who drew post 2.

Other major contenders in the Rags to Riches include: Jessamine Stakes (G2) fifth-place finisher Princesa Carolina, who was supplemented to the race for $500 by trainer Kenny McPeek and owners Three Chimneys Farm after she did not make the pre-entry field of 14 for the Breeders’ Cup Juvenile Fillies Turf; Alcibiades Stakes (G1) fourth-place Chocolate Kisses for owner Debby Oxley and trainer Mark Casse; Spendthrift Farm’s recent three-length maiden winner Into Mystic for trainer Todd Pletcher.

All fillies will tote 118 pounds except My Wynter Rose who will carry 120.

Preakness 2022: Who are the fastest contenders?
Barring any major surprises, Epicenter will be the...
x