Cox: Monomoy Girl might take on boys sooner than later 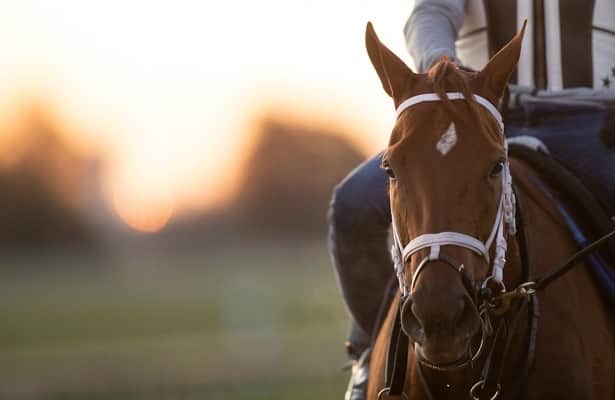 A wet track Saturday morning at Oaklawn threw Brad Cox a curveball when he could not breeze Monomoy Girl as planned ahead of next weekend’s Grade 1, $1 million Apple Blossom Handicap.

But he threw a breaking pitch right back. He volunteered that the two-time champion mare might finally be taking on male rivals sooner than later.

“Hopefully she can return even better than she was,” Cox told Horse Racing Nation by phone Saturday from Oaklawn. “That gives us the opportunity to maybe challenge the boys.”

So next Saturday’s heavyweight showdown with 2020 champion 3-year-old filly Swiss Skydiver might be a fork in the road for Monomoy Girl, who has won six in a row and 14 of 16.

“If she performed well enough, and we saw what we needed to see, it would be something we would talk over with the guys at Spendthrift and My Racehorse and Madaket to see if that was an option and there was a race that made sense,” Cox said.

Cox did not say what race that might be. What sounded evident was that a victorious Bayakoa (G3) on Feb. 28 in the Oaklawn slop might have been the 6-year-old mare’s final race at something other than the top level.

“We obviously would like to run in a Grade 1 with her,” Cox said. “Anytime you’re running against the boys in Grade 1s or more, they’re going to be super-competitive races. I don’t have any particular race in mind. A mile or more Grade 1 probably.”

Cox said that probably means another road trip or two will be in Monomoy Girl’s future.

“We don’t have a lot in Kentucky after the Derby, so we might have to venture up to New York over even possibly California in order to find something that fits that category,” he said. “And there’s the Breeders’ Cup later this year at Del Mar. That’s what we’re trying to get to somehow some way.”

Before gazing way ahead nearly seven months to figure out which Breeders’ Cup race would be chosen for her, Monomoy Girl and jockey Florent Géroux were assigned top weight of 124 pounds for the Apple Blossom, already her career-high impost.

“Wish it were a little more,” Swiss Skydiver’s owner Peter Callahan said in a text message. “But we’ll take our chances. Good luck.”

Since winning the March 13 Beholder Mile (G1) at Santa Anita in her first race as a 4-year-old, Swiss Skydiver was assigned 122 pounds, two fewer than her career-high last month and one more than she carried last fall at the Breeders’ Cup.

“We’re excited about it. It’s $1 million. You would expect this race to be a great race,” trainer Kenny McPeek told HRN on Saturday. That was after Swiss Skydiver turned in a 1:00.4 workout over five furlongs before the rain came to Churchill Downs. McPeek said it was a maintenance breeze.

He also said last month’s triumph in California reinforced his belief that all the trouble Swiss Skydiver encountered at the Breeders’ Cup Distaff was to blame for her seventh-place finish to Monomoy Girl last November.

“It was every reason,” he said. “If you looked at the back of her ankle and her pastern after that race, she had every excuse. Now it’s a new day. We felt like if we won the Beholder that this would be an ideal next start.”

With Tuesday set as the date to ship to Arkansas, McPeek said he is more focused on next Saturday than on whether Swiss Skydiver might take on the boys this year as she has done twice before, including in her signature victory last year in the Preakness.

“We’re looking forward to a jump forward with her numbers in this race coming up to make sure she’s as good as she was,” he said. “She certainly seems to be in the mornings. We’re just trying to get past this tall task here in the Apple Blossom, and we’ll see how it works out.”

Attorneys are talking to try to let Medina Spirit into Preakness
Baltimore  Not long after Kentucky Derby winner Me...