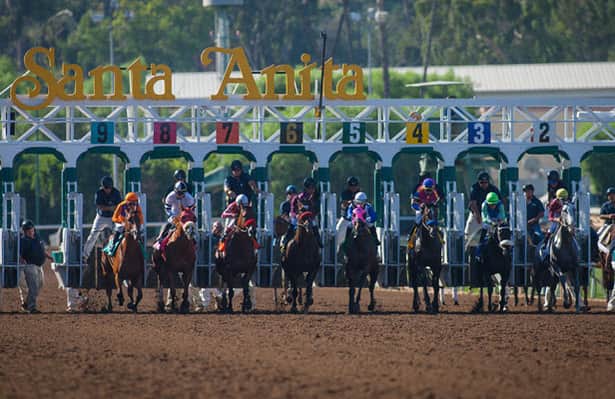 The Eclipse Awards, which honors the 2021 champions of Thoroughbred racing, will be held in California for the first time since 2012. Winners in 17 horse and human categories will be announced at Santa Anita and live on TVG, and other outlets, beginning at 8 p.m. EST. The evening will culminate with the announcement of the 2021 Horse of the Year.

Eclipse Awards tickets and information on the awards show, dinner and party is available at the NTRA website.

Courtney, Eurton and Gaudet began hosting the Eclipse Awards ceremony together in 2020. Yu joins as a host for the first time.

Courtney is in her sixth year as a handicapper and paddock reporter for Gulfstream Park's simulcast feed. She also works with the New York Racing Association and is one of the hosts of the popular show America's Day at the Races, and a paddock reporter for Saratoga Live, both on FOX Sports. A native of Connecticut, Courtney began riding at the age of eight, training in the hunter-jumper and dressage disciplines.

In 2011, Courtney founded the 501(c)(3) nonprofit Racing for Home, Inc., which she runs with her mother, Sherrie. Accredited by the Thoroughbred Aftercare Alliance, Racing for Home is dedicated to retraining and re-homing off-track Thoroughbreds for new careers after the track.

Eurton serves as a reporter and host for many of horse racing’s largest events through her continuing work with TVG Network and NBC Sports, including the Triple Crown, Royal Ascot, and the Breeders’ Cup World Championships. Eurton began her broadcasting career in 2014 with TVG Network, where she covers Thoroughbred racing across the U.S. and internationally.

Eurton, who made her NBC Sports debut in June 2017 on the Breeders’ Cup Challenge Series, worked her first Triple Crown for NBC Sports in 2018 and was a co-host for the network’s coverage of Royal Ascot in 2019. She resides in Los Angeles and is a graduate of the University of Southern California. She is the daughter of Peter Eurton, a former jockey and accomplished Thoroughbred trainer.

Gaudet grew up in a horse racing family as her parents, Linda and the late Eddie Gaudet, were trainers in the Mid-Atlantic region. She began her career as a racing analyst and paddock reporter for the Maryland Jockey Club in 2013 and from there went on to cover horse racing nationally at Arlington Park, the Breeders’ Cup, and at Gulfstream Park. In 2016, she joined the New York Racing Association’s broadcast team as a racing analyst and reporter.

In 2019, Gaudet joined TVG on a year-round basis as an analyst and reporter covering premier racing including the Gulfstream Park Championship Meet, Keeneland and Churchill Downs. In addition to being part of the Keeneland team in April as co-host of “Today at Keeneland” and as paddock commentator, Gaudet expanded her responsibilities with the track to include U.S. sales representation and recruitment. Gaudet is married to trainer Norm Casse. Her sister, Lacey Gaudet, is also a trainer.

Yu is currently a member of the award-winning Santa Anita Park simulcast team. An avid horsewoman from a young age, Yu's first foray onto the backside was as a hotwalker before moving onto TV production. Eventually this landed her in front of the camera as an analyst and presenter.

After nearly two decades in the industry, her resume includes FOX, Breeders' Cup, HRTV, TVG and various international shows.  Yu is married to Santa Anita based trainer Ryan Hanson and they have two children, Olivia (5) and Spencer (3). Still involved in horses daily, Yu assists in yearling pretraining and is also an owner.