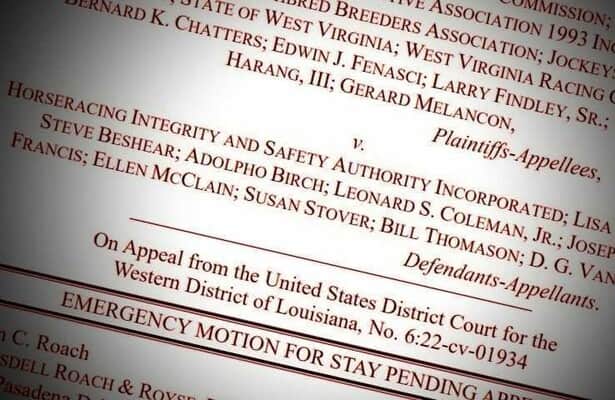 The Horseracing Integrity and Safety Authority was allowed to enforce most of its rules in two states after a federal appeals court ruling on Monday.

The order from the U.S. Court of Appeals Fifth Circuit extended a preliminary injunction for Louisiana and West Virginia that was granted late last month by U.S. District Court judge Terry Doughty of the Western District of Louisiana, pending HISA's appeal of a lower-court ruling.

Doughty had ordered HISA to stop exercising its power in the two states.

In Monday's action, the court ordered that the appeal be expedited to September for oral arguments.

The court stayed the injunction on all HISA regulations in question, except for rules that cover the authority's investigatory powers and rules that address the dates for nomination and entry to races.

Former President Donald Trump signed HISA into law in the final month of his administration after Congress added it to a COVID-relief and omnibus spending bill in December 2020. Designed to fill the void of a common authority to manage racing, it went into effect with racetrack-safety and administrative rules on July 1.