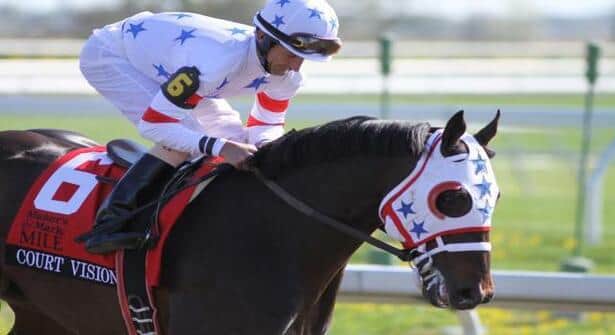 Successful in his only other appearance at Hollywood Park, Court Vision is back for another visit.

The winner of the 2008 Hollywood Derby, the Gulch horse out of the Storm Bird mare Weekend Storm is among 10 scheduled to run in the $250,000 Citation Handicap Saturday.

A Grade II at 1 1/16 miles on grass, the Citation is one of two graded stakes that will be run Saturday as part of Hollywood Park’s annual Turf Festival. The card also includes the $100,000 Generous Stakes, a Grade III for 2-year-olds at one mile. The Generous is the seventh race and the Citation is the ninth of 10.

In addition, there will be a Mike Smith bobblehead giveaway.  The items will be available – one per paid admission – while supplies last. Post time Saturday is 12:30 p.m.

Owned by IEAH Stable, Resolute Group Stable and WinStar Farm LLC and trained by Rick Dutrow, Jr., Court Vision was fifth in the Breeders’ Cup Mile Nov. 6 at Churchill Downs. The 5-year-old has won eight of 25 and banked $2,591,521. He was trained by Bill Mott when he won the Hollywood Derby. He defeated Cowboy Cal and seven others that day.

Bruce’s Dream will seek to become only the second California bred winner of the Citation. Painted Wagon is the only state bred to have succeeded, winning the inaugural Citation in 1977 when it was run at 1 1/16 miles over the main track.

Owned by breeder Bruce Corwin and trained by Mike Puype, Bruce’s Dream won for the sixth time in eight starts when taking the John C. Mabee California Cup Mile Oct. 30. The 4-year-old Atticus gelding out of the Smokester mare Remember Dorothy has earned $293,940.

Enriched, a half-brother to three-time Hollywood Gold Cup winner Lava Man, returns to the turf. The 5-year-old High Brite gelding out of the Nostalgia’s Star mare Li’l Ms. Leonard, who was the beaten favorite in the California Cup Classic Oct. 30, has won two of three over the Hollywood Park grass. Owned by W.C. Racing, Westside Rentals.com and Neil Haymes and trained by Doug O’Neill, Enriched has won seven of 23 and banked $530,656.

A neck behind Bruce’s Dream in the Cal Cup Mile, Colgan’s Chip is making only his second appearance in a graded stakes. The 5-year-old Cee’s Tizzy gelding and the Theatrical mare Leaning Tower was second – defeated by a nose by Liberian Freighter – in his other try in a Grade II in the Oak Tree Mile Oct. 9. He’s won four of 13 and earned $232,712 for trainer Jenine Sahadi, who won the 1995 Citation with Fastness, and owner Green Lantern Stables.

The field also includes Meteore and Victor’s Cry, the 4-5 finishers in the Oak Tree Mile.

Owned and bred by the Wertheimer brothers and trained by Richard Mandella, Metore is trying to end a seven race losing streak. The 4-year-old son of Pulpit and the Twining mare Meteor Miracle hasn’t won since taking the La Jolla Handicap Aug. 15, 2009 at Del Mar. The Kentucky bred is 3-for-16 lifetime with earnings of $253,276.

A win by Meteore would be the fourth in the Citation for Mandella, tying him with the late Charlie Whittingham and Wally Dollase for the lead. The Hall of Fame trainer’s latest Citation success came with Redattore in 2003.

Trained by Eoin Harty for Equilete Stable, Victor’s Cry has lost three times since his 21-1 upset in the Shoemaker Mile, a Grade I, May 31 at Hollywood Park. The 5-year-old son of Street Cry and the Clever Trick mare Short Time has won five of 20 and earned $414,021.

Violon Sacre arrives from the opposite coast having won two in a row and three of his last four, including a one length victory in the Knickerbocker, a Grade III, Oct. 17 at Belmont Park. Patrick Biancone trains the 5-year-old Stravinsky horse out of the Kendore mare Histoire Sainte for Bernard Weill. Violon Sacre has won 10 of 17, banking $489,392.

Ryehill Dreamer is trying tougher in his second for trainer Julio Canani after an easy win against optional claimers in his first in nearly 21 months Oct. 8. Marsha Naify owns the 4-year-old Catcher in the Rye gelding and the Rainbows for Life mare No Way. Ryehill Dreamer has won three of seven and earned $149,007.

Proudinsky will be making his first start since winning the San Gabriel Handicap last Dec. 27 at Santa Anita. The 7-year-old German bred son of Silvano and the Dashing Blade mare Proudeyes has won seven of 22 and has a bankroll of $1,225,953.

Owned by Johanna Louise Glen-Teven, Proudinsky will be trying to give Humberto Ascanio his second win in a row in the Citation. Ascanio, the longtime assistant to the late Bobby Frankel, scored last year with Fluke. The last trainer to win the race consecutively was Dollase, who repeated with Good Journey (2001-2002).

Third in the California Cup Mile after winning the Oak Tree Mile at 22-1, Liberian Freighter has eight wins in 23 starts and has earned $583,740. Neil Drysdale trains the 5-year-old Bertrando gelding out of the Slewpy mare Anachristina for breeder King Edward Racing Stable, Shawn Dugan and Charles Winner.

Owned by J. Paul Reddam, Boxeur des Rues had a less than auspicious United States debut in the Norfolk Stakes Oct. 2. The Smart Strike colt out of the Caerleon mare Marseille Express bolted approaching the top of the stretch in the Grade I, unseating jockey Rafael Bejarano.

This will be the first start on turf for Boxeur des Rues, a first out winner over a synthetic surface Sept. 3 at Kempton in Great Britain. Boxeur des Rues has earned $6,082.

Divine Child, a distant fourth in the Real Quiet Stakes Nov. 6, will also be making his grass debut. Owned by O’Neill and his brother Dennis, the Pleasantly Perfect colt and the Numerous mare Grey Traffic has one win in three starts – the victory came via disqualification Sept. 25 at Fairplex – and has earned $23,200.

Dominator will be making his first appearance in this country and for O’Neill. The Motivator gelding out of the Night Shift mare Subya, earned $5,169 for his debut win Aug. 7 at Ayr in Great Britain. He is owned by Steve Rudolf.

Comma to the Top is bidding for his fourth win in a row for owners Gary Barber, Roger Birnbaum and Kevin Tsujihara and trainer Peter Miller. The son of Bwana Charlie and the Stormy Atlantic mare Maggies Storm was successful in his first around two turns, winning the Real Quiet by 6 ¼ lengths. He’s 4-for-8 lifetime with earnings of $116,600.

Like Dominator, Surrey Star is making his initial start in the U.S.  An Irish bred son of Dubawi the Fantastic Light mare Turning Light, he won once in eight tries in Europe, earning $36,196. Jim Cassidy trains for Class Racing Stable.

Completing the field are Moment of Weakness, who split the field in the Bourbon, a Grade III, over the Keeneland turf in his last start Oct. 10, two time sprint winner Gab Power, Mazarron, who defeated maidens in his two turn debut over Cushion Track Oct. 28 and Tappin Tough, idle since finishing seventh of eight in the Hollywood Juvenile Championship July 5.