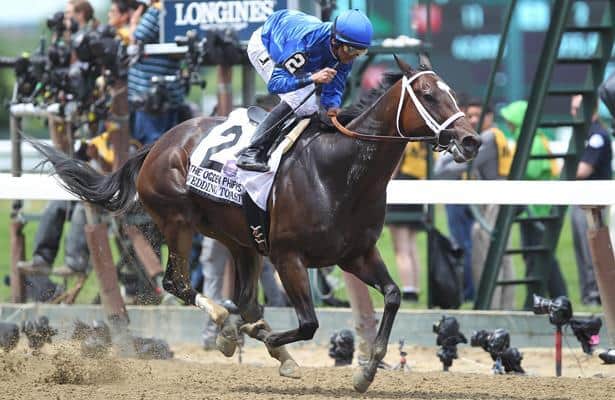 Godolphin Racing's Wedding Toast, a dominating winner of the Grade 2 Ruffian and the Grade 1 Ogden Phipps this spring, will find herself back amid comfortable surroundings this Saturday at Belmont Park, taking on five rivals for her racing return in the Grade 1, $400,000 Beldame.

A seven-time winner from 11 career races, including a record of four-for-five at Belmont, the daughter of Street Sense boasted three stakes victories in five 2015 starts midway through her 5-year-old campaign. After sweeping the Ruffian and the Ogden Phipps by a combined nine lengths, her trainer, Kiaran McLaughlin looked to keep the momentum going, pointing Wedding Toast to the Grade 1 Personal Ensign on Travers Day at Saratoga before her training was sidetracked by a minor issue, he said.

A one-month absence from the worktab led her connections to focus instead on the Beldame, a 1 1/8-mile one-turn route over Belmont's main track, for her comeback off a 3 ½-month layoff.

"She missed a few works there and we opted not to run her [in the Personal Ensign]. We just wanted to get her right," McLaughlin said. "She just wasn't quite 100 percent. No big issues, but we wanted to skip that race and point for here because she loves the Belmont one turn."

"She's doing great and we're looking forward to running her," he added.

Wedding Toast will be ridden by her regular jockey Jose Lezcano from post 2 as the 6-5 favorite on the morning line.

Among the veteran mares attempting to thwart Wedding Toast's homecoming is New York-bred standout Hot Stones. After getting a late start to her 5-year-old season, the Bustin Stones mare got her first win in her third try of the year, winning an optional claiming event by three lengths against open company in June before turning in an impressive front-running performance in the Saratoga Dew on August 17, romping clear to a 9 ¼-length triumph over her state-bred rivals.

"We have to beat Wedding Toast but Hot Stones is doing good," Levine acknowledged. "[Wedding Toast is] off a layup so it'll be the time to take her on. [Hot Stones] is doing good and she runs well at Belmont so we're looking forward to it."

Hot Stones will leave from post 3 at morning line odds of 6-1 with Javier Castellano aboard for the first time.

Eclipse Thoroughbred's Curalina will look to pose a respective threat of her own, taking on older rivals for the first time as the lone 3-year-old in the field for trainer Todd Pletcher.

Coming off a third-place finish in the Grade 1 Alabama, Curalina had posted four consecutive victories in 2015, including Grade 1 scores in the Acorn, in which the Curlin filly overcame a troubled start to win by a neck in her stakes debut, and the Coaching Club American Oaks when she was elevated to first-place after the disqualification of I'm a Chatterbox.

Curalina has drawn the rail as the 3-1 second choice. Regular rider John Velazquez has the mount.