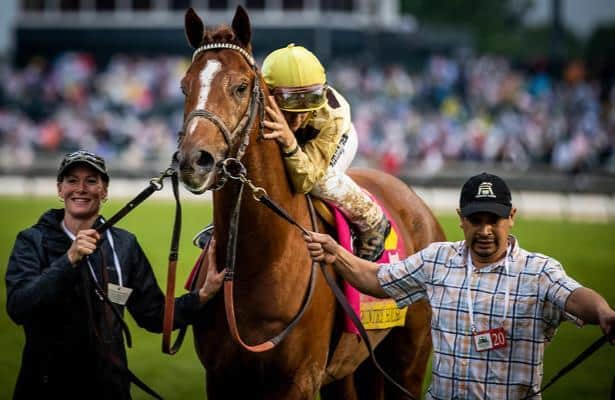 Trainer Bill Mott said Tuesday that Kentucky Derby winner Country House will miss the Preakness Stakes, citing a cough that could turn into something more before the May 18 race at Pimlico Race Course.

“No fever or anything, which is interesting,” Mott said, “but I think if we pressed him at this time, he probably would come down with something. I think he’s in the very initial stages of trying to get sick, or he’s got a little bug going on.”

Country House ran his best career race to be second across the wire at Churchill Downs, 1 3/4 lengths behind Maximum Security, who was disqualified after veering out into his rivals near the 5/16ths pole.

Country House, by Lookin At Lucky, made the Derby his third start in six weeks following finishes of fourth in the Louisiana Derby (G2) and third in the Arkansas Derby (G1).

“What he’s gone through with the proximity of the races and the stress of the race itself, I guess it finally got him,” Mott said. “It just challenges their immune system — probably no different than us.”

Country House was scheduled to return to training Wednesday. Mott said those plans are now on hold, but the June 8 Belmont Stakes is not out of the question.

A Kentucky Derby winner hasn't skipped the PReakness since Grindstone retired five days after the 1996 Derby.

Maximum Security will also bypass the Preakness as his connections seek legal action to reverse what was a unanimous ruling by stewards to place him 17th. Trainer Shug McGaughey said Code of Honor will skip the second leg of the Triple Crown as well.

Twenty-four hours earlier, Mott said connections were "leaning toward" the Preakness with Country House "since he is the Derby winner and we don’t want to pooh-pooh the Triple Crown. We want to support that. If he’s real good and continues to do well with no issues, not worn out, all those good things, we’ll keep pecking away and going in that direction."

Exiting the Derby, Improbable, War of Will and Bodexpress, a maiden, appear to be the only contenders moving on to Baltimore, but a strong bunch will challenge them.