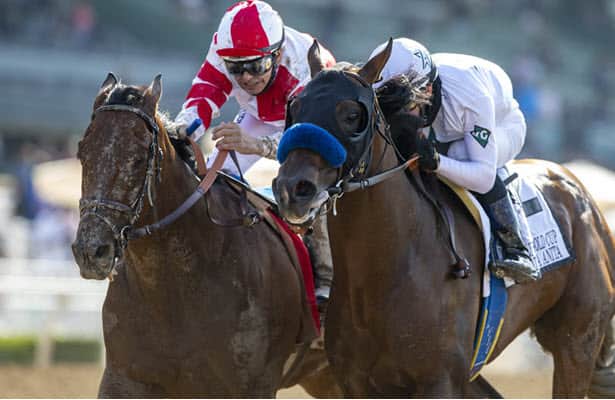 In an ultra-game performance, Bob Baffert’s Country Grammer battled back inside the length of the stretch and prevailed by a head over Brazilian-bred Royal Ship in Monday’s Grade 1, $300,000 Hollywood Gold Cup at Santa Anita.  Ridden by Flavien Prat, Country Grammer got a mile and one quarter in 2:02.23 and thus provided Baffert with his eighth Gold Cup win—equaling the legendary Charlie Whittingham, who registered his final Gold Cup win with Hall of Famer Ferdinand in 1987.

A measured second, about a half length off of longshot pacesetter Brown Storm a half mile from home, Country Grammer gained the advantage mid-way around the far turn but was immediately engaged by Royal Ship to his outside, who appeared to be in control a furlong from the wire, by Country Grammer battled back and got the job done, giving Prat his first-ever Gold Cup win.

“He ran super well,’ said Prat.  “He broke well and I was able to get myself in a good spot.  I was a little worried when I saw Mike Smith (aboard Royal Ship) on the outside of me, I wish I could have kept him inside.  Mike took the lead on me, but my horse was really game to come back.”

A 4-year-old colt by Tonalist who had run his first six races for eastern-based Chad Brown, Country Grammer made his debut for Baffert in the Californian (G2) at Santa Anita on April 17, finishing second by a neck to Royal Ship.

Owned by WinStar Farm, LLC, Country Grammer, who is out of the Forestry mare Arabian Song, took his second graded stakes and now has three wins from eight starts.  With the winner’s share of $180,000, he increased his earnings to $377,320.

“Elliot Walden and WinStar bought him to bring to California because they figured a mile and a quarter was his distance,” said Baffert.  “His form on the dirt was really good last year.  It looked like he was beat today, but he kicked it in…It’s exciting.  He ran a big race last time and just got beat.  He was really ready to go today and I think the distance was the key.  He got it done with a lot of class and determination.”

Ridden by Mike Smith, Royal Ship was trying a mile and one quarter for the first time and was gallant in defeat, finishing some 4 ¼ lengths clear of Express Train.  Off at 3-1, Royal Ship paid $4.20 and $2.80.