Country Grammer has eyes on Travers after breakout win 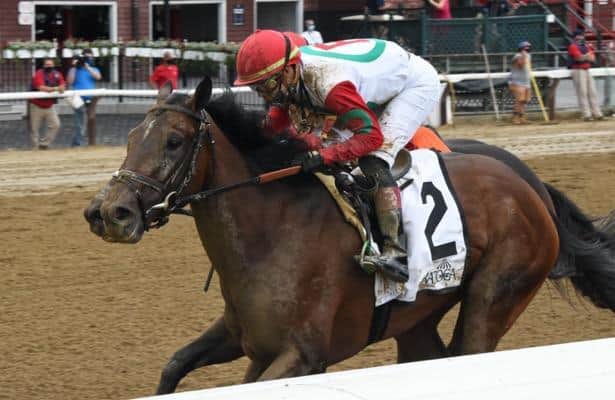 Following a victory in Thursday's Peter Pan Stakes (G3) at Saratoga Race Course, Country Grammer is a likely candidate for the Grade 1, $1 million Travers on August 8, according to his connections.

Owned by Paul Pompa, Jr. and trained by Chad Brown, the 3-year-old son of second crop sire Tonalist notched his first graded stakes score in the 1 1/8-mile event for sophomores over the main track. Guided by Irad Ortiz, Jr., Country Grammer broke sharply from post 2, tracked in fourth off a moderate pace, found an opening along the rail around the far turn and established command at the top of the stretch holding off Caracaro to win by a neck, registering a 95 Beyer Speed Figure.

"If he comes back well, the Travers would be the logical spot. It's coming back a little soon but so far, so good," Pompa, Jr. said. "We always have liked this horse, but the COVID-19 situation has created gaps, just due to lack of racing."

Country Grammer arrived at the Peter Pan off a third-place finish against allowance company at Belmont Park, running 6 ½ lengths to eventual Belmont Stakes fifth-place finisher Tap It To Win. After a fourth place finish in his career debut on grass, he switched to the main track, breaking his maiden by 3 ½ lengths at Aqueduct going the Peter Pan distance.

"Chad always liked him, but he never trained well at Belmont for some reason," said Pompa, Jr. "We knew he would appreciate going two turns. Should we go to the Travers, we think the extra eighth of a mile is to his advantage."

Country Grammer, bred in Kentucky by Scott Pierce and Debbie Pierce, is out of the Forestry broodmare Arabian Song and his third dam Willstar produced Group 1 winner on turf Etoile Montante. He was purchased for $450,000 at the OBS April Sale in 2-Year-Olds in Training Sale, where he was consigned by Wavertree Stables.

Should Country Grammer move forward to the Travers, he would be Pompa Jr.'s second contender in the "Mid Summer Derby". In 2016, he owned sixth-place finisher Connect, who went on to defeat that year's Kentucky Derby top three finishers in the Grade 1 Pennsylvania Derby en route to a Grade 1 Cigar Mile triumph.

"He beat a real tough field in the Pennsylvania Derby that year," Pompa, Jr. said. "There were a lot of serious horses in the race that year and it was the first year they made it a Grade 1. Exaggerator, Nyquist and Gun Runner were all in there, so he beat a really nice field."